Battling the Pentagon, Trump and Sessions — with Margaret Atwood and Ron Reagan on our side

This week at the Freedom From Religion Foundation, we took on the big guns — sometimes literally.

We vociferously objected when the Pentagon had a King James Bible blessed for the newest branch of the Pentagon. “The Freedom From Religion Foundation tweeted that it was ‘protesting a ceremony where the newly formed U.S. #SpaceForce designated and blessed its own bible. Selecting one book as the official “holy book” of a governmental branch is improper and an egregious violation of the Establishment Clause,’” the Washington Post reported.

Talk about a misfire.

Trump’s phony narrative
We didn’t have kind words for the commander-in-chief, either. We admonished President Trump when he held a photo-op on the occasion of Religious Freedom Day to peddle a bogus narrative of persecution and issued worrisome new guidelines for public schools. “One prominent secular group, the nonprofit Freedom from Religion Foundation, views the federal regulations for faith-based groups as ‘a very bad move,’ co-president Annie Laurie Gaylor said by email,” stated the Associated Press. 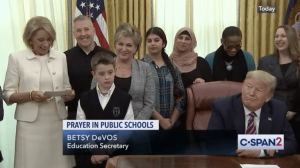 In anticipation of Trump’s directive, we dedicated our Ask An Atheist Facebook Live feature this week to school prayer, with three of our attorneys — Patrick Elliott, Andrew Seidel and Elizabeth Cavell — answering questions from the audience about the issue. 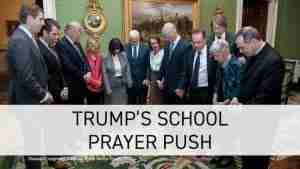 And FFRF Co-President Annie Laurie Gaylor had a rejoinder to the Trump administration’s parading of supposed victims of religious persecution, highlighting in a blog some actual heroes who’ve suffered in the defense of our secular public school system. 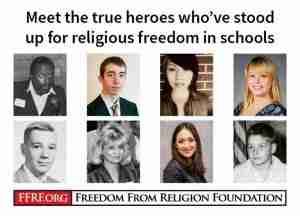 “America’s unique contribution to political science is the separation of state and church,” he writes. “We should be proud of that contribution to the world, but Christian nationalists are doing their best to destroy it. Many groups are actively protecting the wall: the Freedom From Religion Foundation, Americans United for the Separation of Church and State, the ACLU, American Atheists, the Center For Inquiry, the American Humanist Association, and others.”

The IRS doesn’t faze us
Alas, taking on a big-caliber entity such as the IRS is never easy, but we aren’t fazed by a temporary setback in our battle to get it to treat churches and non-churches the same way. After its case was thrown out of court last week, FFRF will be refiling its challenge, after its plaintiff Nonbelief Relief jumps through some legal hoops.

“We are so distressed that Nonbelief Relief is in limbo, and unable to help others on behalf of freethought in a world fraught with natural disasters, hunger, displaced people and discrimination that is often religion-based,” Annie Laurie commented. “This injury extends far beyond just the loss of Nonbelief Relief’s tax-exempt status.”

FFRF Co-President Dan Barker pithily explains in our “Newsbite” segment why FFRF is not giving up its quest to ensure a level playing field for churches and nonchurches alike. 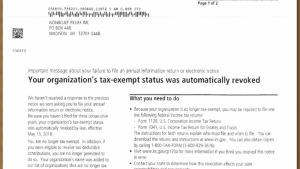 We didn’t let invective from the nation’s former top law enforcement office scare us. When Jeff Sessions made inaccurately disparaging statements about us, we immediately set him straight. “It is our right to point out that you undermined the very Constitution you swore an oath to uphold, as well as the religious liberty rights of every American who does not share your beliefs,” Dan and Annie Laurie wrote to the ex-U.S. attorney general.

Margaret Atwood will be at our convention!
Fortunately, we have some incredible individuals on our side. We’re proud to announce that Margaret Atwood will be gracing our annual convention in San Antonio in mid-November. Atwood, who just won the Booker Prize for the sequel to Handmaid’s Tale, will receive FFRF’s “Forward” Award, which is reserved for those who are moving society forward. “We are beyond honored that a genius and a champion of human rights is gracing our convention,” says Annie Laurie. Sign up now! 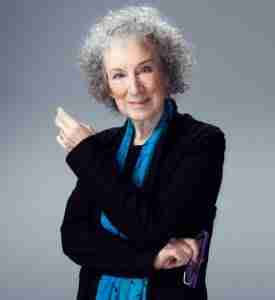 Another luminary who’s been with us for a while now is Ron Reagan, whose ad for us again made a huge social media splash at the most-recent Democratic debate broadcast on CNN and garnered us many new members. “Give us more #RonReagan” and “So stunning. So brave” were just two of the reactions on social media. Please donate if you’d like to see that ad and others making waves in the future. (By the way, you’ll enjoy Ron’s spirited interview about the ad and much more in the Daily Beast.

To bodly go where…
On our radio show this week, we talk about these developments and then interview a person who was associated with one of the biggest cultural phenoms in the modern era: Dan and Annie Laurie chat with Susan Sackett, who for 17 years was the personal executive assistant for Gene Roddenberry, the creator of “Star Trek.” Let’s all live long and prosper. 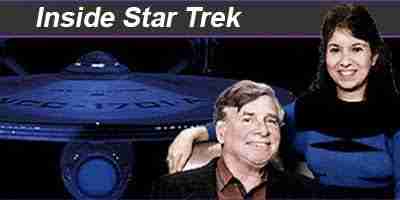 Our nerves are never rattled
We didn’t let other big names deter us. We urged the Oklahoma governor to reject a task force’s recommendation to set up a bible college in the state’s prisons. And we filed a brief before the U.S. Supreme Court with a novel take on the Religious Freedom Restoration Act: that it should be declared unconstitutional. 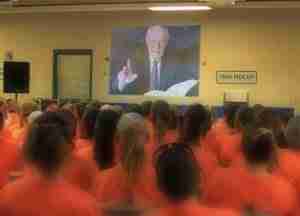 A poignant television interview
We have a poignant interview on our “Freethought Matters” show this Sunday. Dave Warnock, a former minister who has become an atheist, spent 37 years as a charismatic evangelical preacher in Tennessee. After recently learning about his terminal illness, Warnock has launched a speaking tour that he calls Dying Out Loud. “My message today is this is the one life we have,” he tells Dan, also an ex-pastor, and Annie Laurie. Find out where you can watch the show. Or you can always catch it on our YouTube channel. 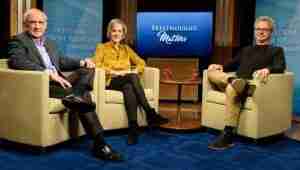 We’re in Arkansas
We have an exciting upcoming public appearance for those of you living in the Razorback State and nearby. FFRF Senior Counsel Patrick Elliott will be deciphering the “Theocrats’ Playbook” at the Unitarian Universalist Church in Little Rock on Sunday, Jan. 19. Come on by if you’re in the area!

Big guns and big names — it doesn’t matter who is arrayed against us as long as we have you on our side.