It’s astonishing that figures as polarizing and doctrinaire as Ann Coulter would seriously be in contention to serve as press secretary under Donald Trump. I suppose we should be grateful that so far Sean Hannity and Bill O’Reilly haven’t been mentioned. But their sometimes cohort, Laura Ingraham, has been, and is in fact considered one of the top contenders. Ingraham doesn’t have a shabby resumé, but for many years she has been a Religious Right apologist.

This just isn’t just politics as usual — or the norm for press secretary nominations.

When six of our irreverent billboards were removed in Las Vegas in December 2009, she decided to bash me as a guest on Fox TV. You can watch the segment here: 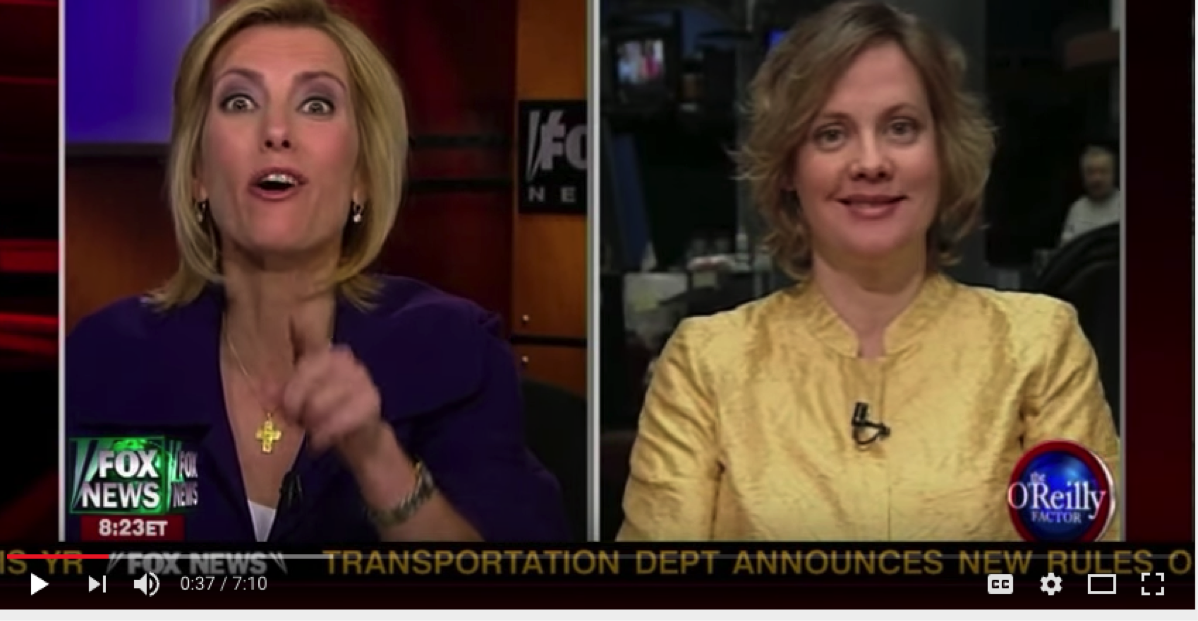 Ingraham, wearing a very prominent cross, actually did give me more airtime, albeit interrupted, than typical Fox TV male personalities do. You’ll notice that everything I said was met with derision. It’s one thing for a Fox News commentator hired to perform as a partisan hack to behave this way, but will Trump actually pick such a person to be the public face of the White House to the nation’s press corps? Why not? Consider whom he picked to be his “chief strategist and senior counselor”?

Bannon bills Breitbart News as the third-largest conservative news website, which certainly gives “conservative” a bad name. The controversial and disturbing nature of much of Breitbart news coverage has been well-documented. (Read FFRF’s own statement, “Steve Bannon a threat to all we hold dear”).

Bannon has also described Breitbart as a platform for the “alt-right.” The Associated Press, The Guardian (UK) and The New York Times have recently released guidelines on the term. The New York Times proffers this formal definition: “a racist, far-right fringe movement that embraces an ideology of white nationalism and is anti-immigrant, anti-Semitic and anti-feminist.”

Not much has been written about Bannon’s views on religion. It turns out he’s old-school Roman Catholic. He proudly calls Breitbart “the voice of the anti-abortion movement, the voice of the traditional marriage movement.” A window into Bannon’s religious worldview is provided by a transcript of his disturbing remarks to a conference at the Vatican placed online recently by BuzzFeed News. Bannon, via Skype, addressed a gathering of arch-conservatives hosted by Human Dignity Institute, which works to promote “a Christian voice” in Europe. According to BuzzFeed, the group has ties to “some of the most conservative factions inside the Catholic Church.”

Most startling was Bannon’s bizarre characterization of World War II (and possibly World War I — it’s hard to tell given his run-on sentences) as being “the Judeo-Christian West versus atheists.” Come again? It’s unclear if he’s speaking about atheists or Islamic terrorists when he then calls on “the church militant” to come out in full force today:

“And we’re at the very beginning stages of a very brutal and bloody conflict, of which if the people in this room, the people in the church, do not bind together and really form what I feel is an aspect of the church militant, to really be able to not just stand with our beliefs, but to fight for our beliefs against this new barbarity that’s starting, that will completely eradicate everything that we’ve been bequeathed over the last 2,000, 2,500 years.”

After making it clear he’s rolling up his sleeves for a new Crusade, he returns to the topic of secularism, particularly blasting the growing irreligiosity of the younger generation:

“The other tendency is an immense secularization of the West. And I know we’ve talked about secularization for a long time, but if you look at younger people, especially Millennials under 30, the overwhelming drive of popular culture is to absolutely secularize this rising iteration.”

Bannon is clearly one of those Christians who takes to heart Jesus’ injunction that “if you’re not with me, you’re against me” (Matthew 12:30, Luke 11:23). He told this Catholic gathering: “I believe the world, and particularly the Judeo-Christian West, is in a crisis. And it’s really the organizing principle of how we built Breitbart News to really be a platform to bring news and information to people throughout the world. Principally in the West, but we’re expanding internationally to let people understand the depths of this crisis, and it is a crisis both of capitalism but really of the underpinnings of the Judeo-Christian West in our beliefs.”

One fears that Bannon will relish his unprecedented opportunity to create ever more crises around the world in his righteous quest to promote his brand of “Judeo-Christian” beliefs. Careful newspaper definitions notwithstanding, perhaps “alt-right” is really a euphemism for good old-fashioned fascism.

It seems the inmates truly are going to be running the White House “asylum.”

P.S. And did you hear that Mike Huckabee is being floated as ambassador to Israel?

Annie Laurie Gaylor is co-president of the Freedom From Religion Foundation. She co-founded FFRF in 1976 as a college student with her mother Anne Nicol Gaylor. She served as the editor of FFRF’s newspaper, Freethought Today, from 1985-2009. She became FFRF co-president with Dan Barker in 2004. Annie Laurie has authored three books for FFRF: Woe to Women: The Bible Tells Me So; Woe to Women: The Bible Tells Me So; and Women Without Superstition: “No Gods – No Masters”, the first anthology of women freethinkers.
All Articles by this author
PrevPreviousWe’ve been working frantically
NextSupport companies that seek an inclusive holiday seasonNext