Skip to content
PrevPreviousWhere the personal is the political
NextEaster fools, April Fools and Jesus’ punditsNext

An Atheist visits the Museum of the Bible

Desperate. Trying too hard. Overdone. That’s the Museum of the Bible.

The museum is the pet project of Steve Green, owner of Hobby Lobby. The Freedom From Religion Foundation and I have battled and beaten Green on the bible before. He wanted to put a class in Oklahoma public schools that was full of proselytizing, bad history, and abysmal scholarship, so my expectations for the Museum of the Bible were low.

But I wanted to be impressed. I wanted to learn something. I wanted to be pleasantly surprised by a fair-minded presentation. With a few notable exceptions, however, the museum failed to meet even my low expectations.

Let’s be charitable and do the exceptions first. Three things stood out.

First, the museum has working reproduction of Gutenberg’s printing press. A docent helped children print off their own pages, from Isaiah, on the press to take home. That was objectively cool. After all, the Gutenberg Bible’s historical significance is beyond question. That significance, though, is not because of the book’s content, but because of the technology that produced it. Gutenberg’s Bible wasn’t earth shattering; his movable type and press were. 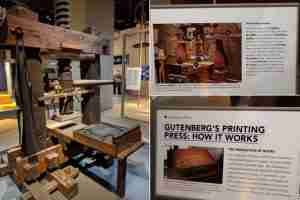 Second, two massive bronze doors lead into the museum (which, according to staff, are not really doors as they don’t open or close). Gutenberg’s press produced text in two columns, and each door is a massive reproduction of one of those columns of text. That is impressive. 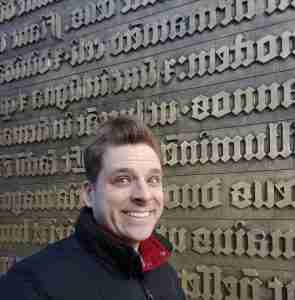 Finally, in a tiny display case called “The Bible and The Supreme Court,” there appeared a Topps collectible card of Supreme Court litigant and champion of the First Amendment, Vashti McCollum. McCollum took a fight to that court over using public schools to preach religion — and won. The display case could have been better and more balanced, but I was intrigued by the Topps card of Mrs. McCollum, even though I haven’t been able to find one of my own. 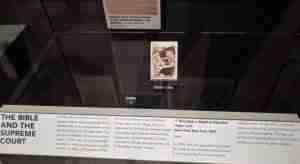 The rest of the museum felt like it was trying too hard to prove something that isn’t there.

I spent most of my time on the second floor, which is meant to show the “Impact of the Bible in America.” It argues that “the Bible helped inspire the country’s ideas about democracy and the belief that religious liberty was essential to its success. It influenced many national debates, including the abolition of slavery and campaigns for civil rights.”

On this floor, the museum’s desperation begins to show. It claims the bible influenced fashion because crosses and religious art appear on clothing.

I would’ve thought that fashion must first be fashionable to make such a claim.

The exhibit on the bible’s influence in Hollywood is just a string of clips shown in a mini-theater. From religious movies like the Ten Commandments, to X-Men 2, which simply shows a Catholic character reciting the Lord’s prayer, to a Book of Revelation misquote in Ghostbusters, the clips fall short of the goal. And, given American Christianity’s insistent attacks on Hollywood as being anti-Christian, the exhibit seems a bit fatuous and self-contradictory.

Then there is the ride. Yup, a ride. “Washington Revelations” is a simulated flight over D.C. in which you “fly” to various landmarks and “learn” about the bible’s influence on those monuments as the “wind” ruffles your hair.

In this ride, the museum truly revealed a bias it had been trying to hide beneath a layer of pseudo-scholarship. For a full explanation of the problems with the ride, please see FFRF’s memo to the museum. Perhaps the most egregious example of this attempt to prove an influence where none exists is when the ride claims that the Book of John influenced Abraham Lincoln’s Gettysburg Address. The ride explains:

“In his Gettysburg Address, President Lincoln drew inspiration from the bible: ‘that this nation, under God, shall have a new birth of freedom — and that government of the people, by the people, for the people, shall not perish from the earth.’ John 16.”

This is simply not true. Read both the texts yourself (they’re only a few hundred words). Or take a look at our memo where you can examine them side-by-side.

The ride also claims that a quote from Thomas Jefferson’s Notes on the State of Virginia, which appears in his memorial, refers to Psalm 145:17-19. It doesn’t.

This isn’t the only problem. The ride concludes at the top of the Washington Monument telling viewers, “Laus Deo or ‘praise be to God’ is carved into the very tip of the Washington Monument” with the supposed bible reference, “Psalm 146:1-2,” onscreen. But if that’s a Latin phrase from that verse of the bible, it should appear in the Latin translations of Psalm 146. It does not. The phrase is not in any of the Latin bible translations available, and there are many online.

The ride also deliberately conflates government monuments with privately erected monuments, including one in Arlington National Cemetery and some quotes on Union Station, to give the impression of a greater influence than otherwise exists.

At the very least, I was hoping to see some cool history. But so many of the exhibits I got excited about turned out to be reproductions or facsimiles. It made me wonder if the more legitimate and established institutions were reluctant to get in bed with the Museum, if only because it infamously purchased thousands of artifacts ISIS smuggled out of Iraq.

When you tire of the museum desperately throwing itself at you like a randy drunk at Mardi Gras, you exit through the gift shop. Here’s where Steve Green, purveyor of cheap religious trinkets made in China and marked up to absurd prices, lets his religious flag fly. The gift shop stock seemed higher quality than the average garbage one finds in Hobby Lobby, but it was still overpriced.

Here too, the Museum of the Bible sets aside its manufactured veneer of scholarship and ecumenicalism. On the bookshelf is a volume by Steve Green called Faith in America. The book’s cover features one of Hobby Lobby’s deliberately misleading Fourth of July advertisements. The book is full of these misleading quotations and largely features Green recounting a conversation with the Christian propagandist David Barton.

Green’s book is light on content: It’s really just showcasing Hobby Lobby’s ads. These ads are meant to appear historic, but deliberately edit and alter the Founders’ words in subtle ways to change their meaning and push the “U.S. as a Christian nation” narrative. It’s a perfect metaphor for the museum as a whole.

The Museum of the Bible is free, but somehow is still not worth the price of admission.

Andrew L. Seidel is a constitutional attorney and the Director of Strategic Response at the Freedom From Religion Foundation. His first book The Founding Myth: Why Christian Nationalism Is Un-American was burned by a Tennessee preacher. His second book, American Crusade: How the Supreme Court is Weaponizing Religious Freedom, is due out in 2022. He's won numerous academic awards and holds two law degrees: a J.D. magna cum laude from Tulane University Law School and an L.L.M. from Denver University’s Sturm College of Law. Andrew has a B.S. in neuroscience and environmental studies from Tulane. Before dedicating his life and law degree to keeping state and church separate, Andrew was a Grand Canyon tour guide and an accomplished nature photographer. Andrew has appeared on Fox News to debate Bill O’Reilly, MSNBC, and hundreds of other media outlets speaking on behalf of FFRF.
All Articles by this author
PrevPreviousWhere the personal is the political
NextEaster fools, April Fools and Jesus’ punditsNext