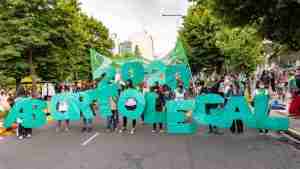 An otherwise dismal year ended with a major triumph for women’s rights in Latin America.

In a historic move, Argentina’s Senate approved in the closing days of 2020 the legalization of abortion in the country, making Argentina the largest nation in Latin America to achieve that distinction. The law, which has the support of President Alberto Fernández, will make abortion legal in all cases up to 14 weeks of pregnancy in direct defiance of the wishes of the Catholic Church and Pope Francis.

The legalization of abortion in Argentina is not only an important measure for reproductive health care but is also a powerful signal that the Catholic Church may be losing its foothold in Latin America. Roman Catholicism is Argentina’s official religion and is embedded in many aspects of Argentine culture. Additionally, the current pope is from Argentina. However, there has been a significant increase in Argentina of those who do not identify with organized religion, particularly among young people. For example, while 92 percent of the country identifies as Roman Catholic, less than 20 percent actively practice the religion. Such religious changes were reflected in a recent national public opinion poll about abortion, in which 41 percent of respondents stated that they strongly or somewhat agree that abortion should be decriminalized versus 35 percent who said that they strongly disagree.

When Argentina’s president introduced the bill in November to make abortion “safe, legal, and free,” Fernández noted that as a Catholic he sees abortion as a matter of public health. For example, he explained that the legalization of abortion would save lives, as nearly 40,000 women are treated annually for clandestine abortions. Perhaps the most horrific story to propel liberalized abortion legislation was of a 11-year-old rape victim forced to give birth by c-section.

Latin America has a 1 in 480 risk of maternal death, compared to 1 in 4,300 in more industrialized nations. Much of this can be attributed to restrictive abortion laws that are rooted in religion. For example, in El Salvador, women can go to jail for having a miscarriage. An estimated 3.7 million unsafe abortions take place in Latin America each year because abortion is illegal, leading to almost 4,000 deaths.

However, Catholic officials still vehemently object to abortion. Despite troubling statistics about deaths and harm due to underground or self-induced abortions, the Catholic bishops’ fervent anti-abortion stance hasn’t quelled. Instead, like their brethren in the United States, they have collaborated with evangelical Christians to fiercely oppose legal abortion. In a handwritten response to a group of anti-abortion activists, the pope compared reproductive health with hiring a hitman. And the Argentine Episcopal Conference implored Catholics and evangelicals to unite in prayer against the abortion legislation. These prayers, thankfully, went unheard.

The legalization of abortion in Argentina will potentially spur reproductive equity across Latin America. The region is for the most part culturally Roman Catholic, and abortion restrictions exist on varying scales in all areas except Cuba, Puerto Rico, Uruguay, Guyana, Mexico City and the Mexican state of Oaxaca. Argentina will soon join these ranks.

It’s bitterly ironic that abortion is so endangered in the supposedly secular United States while Catholic countries like Argentina are waking up to the imperative to abortion rights. Hopefully, the reform will send a message to U.S. legislators and judges who are recklessly agitating to turn back the clock to the bad old days when abortion was illegal here.

Photo via Shutterstock By Oksana Bokhonok

BARBARA ALVAREZ is a contributing writer for the Freedom From Religion Foundation. Previously she had held the role as FFRF's inaugural Anne Nicol Gaylor Reproductive Rights Intern, a program set up to memorialize FFRF’s principal founder, who was an early abortion rights activist and author of the book Abortion is a Blessing. Barbara was a major winner in FFRF’s essay competition for graduate students, writing about the bible’s role in the abortion battle.
All Articles by this author
PrevPreviousSaying farewell to a pandemic year — and wishing for a better year ahead
NextLisa Montgomery case begs for death to the death penaltyNext