Skip to content
PrevPreviousA week to remember
NextGetting honored, combating Kavanaugh — and so much elseNext

Another week where we don’t turn the other cheek

It is hard to believe we are rounding the corner into September. Days are getting shorter and temperatures cooler, but the fight for our secular government is just heating up. With President Trump hosting an official state dinner for evangelicals, continuous fallout on the reports of sexual abuse in the Catholic Church, and Supreme Court justice nominee Brett Kavanaugh’s impending confirmation hearing, it has been another busy week here at FFRF.

FFRF’s ad in the Times takes on the Church’s crimes
FFRF ran a full-page ad in The New York Times this week, urging people to quit the Catholic Church in light of its seven decades of sexual crimes against children detailed in the recent Pennsylvania grand jury report, and cover-ups on a global scale. “Priests were raping little boys and girls, and the men of God who were responsible for them not only did nothing; they hid it all,” reads the ad. Your support makes FFRF’s cutting-edge advertising possible. Donations earmarked for advertising will go to work. 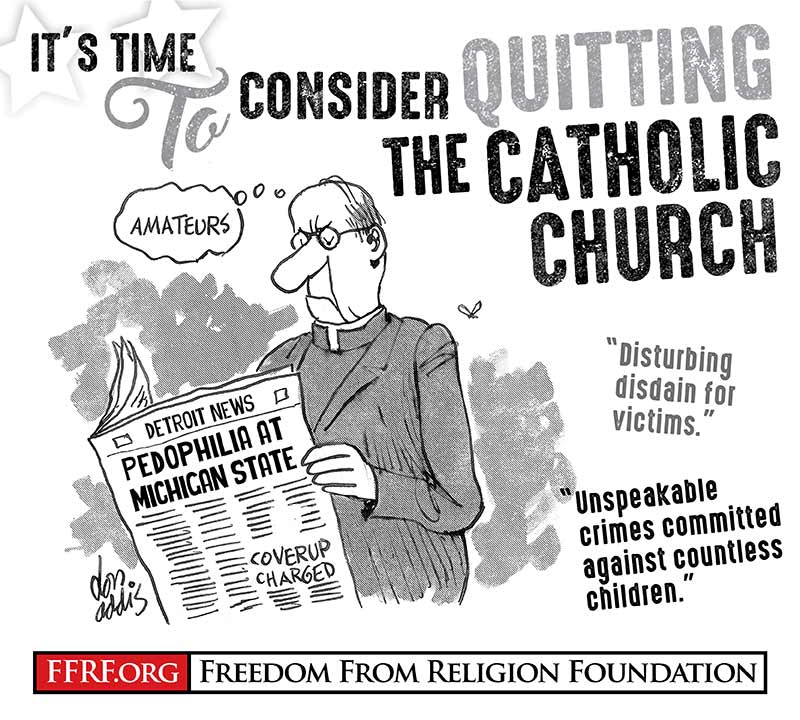 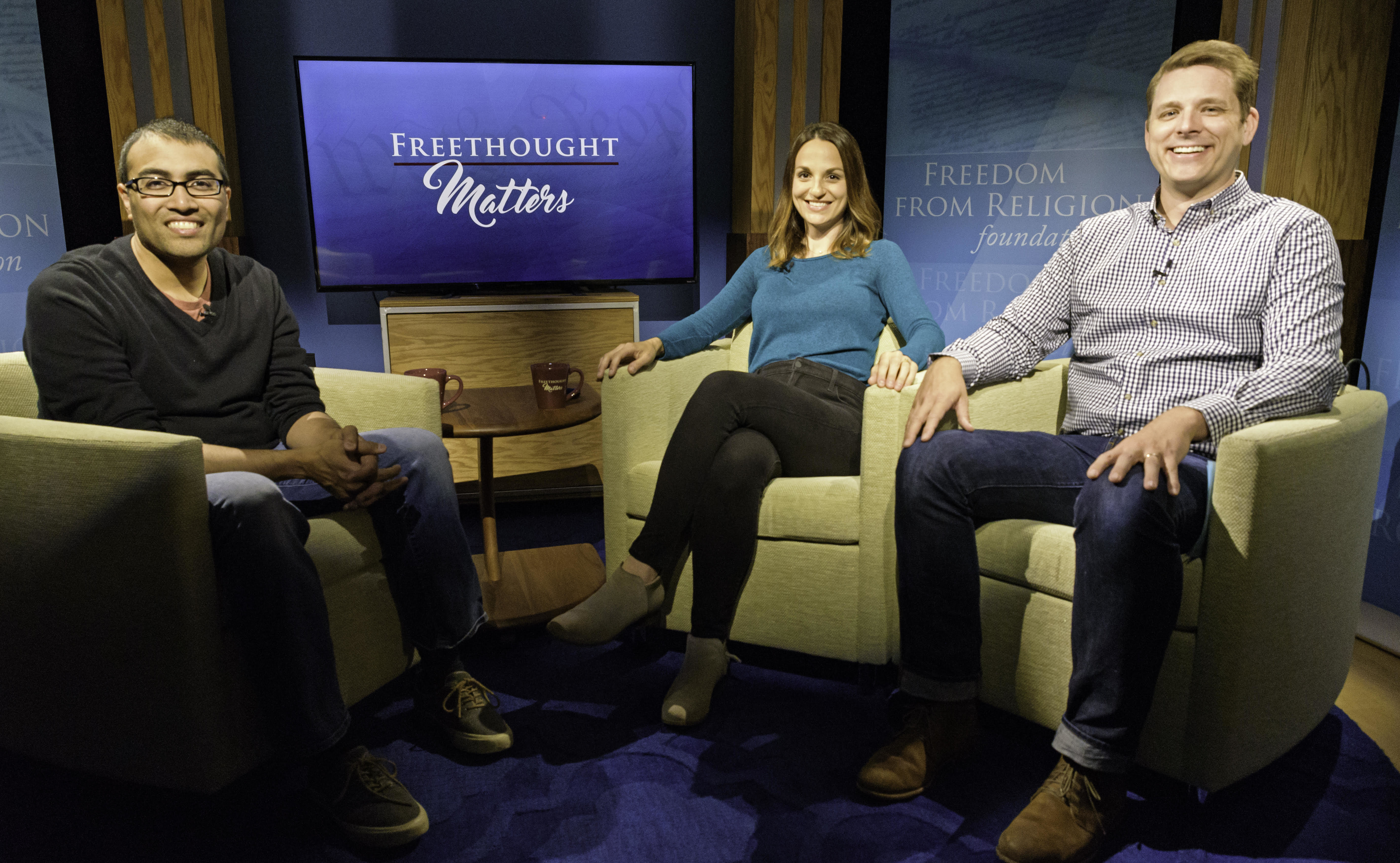 Be a public school teacher, not a homophobic preacher
FFRF issued a warning to a public charter school in Sacramento after a student complained that a teacher was making disturbing comments about homosexuality. Calling homosexuality “a sin” and sourcing it to childhood abuse, the teacher also told students they could borrow her bibles or “go to their pastor for counseling to become heterosexual again.” No thanks. 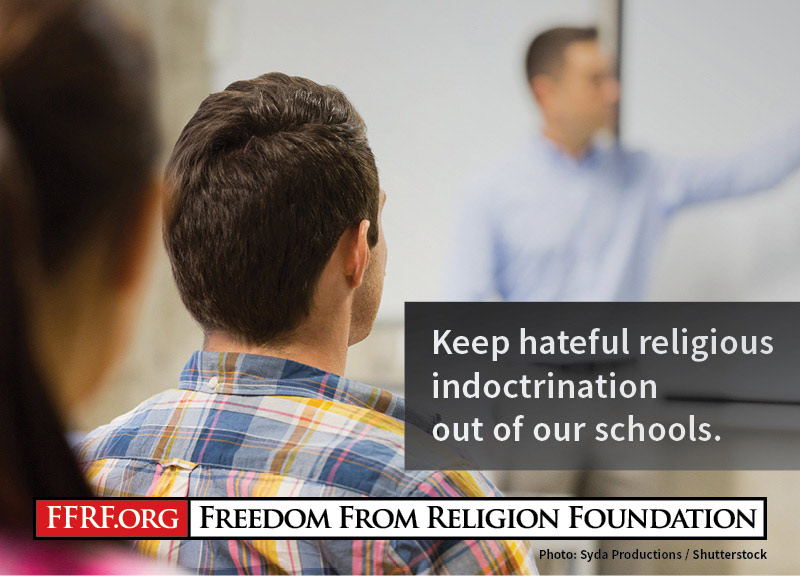 Trump’s evangelical dinner was not a state/church winner
The Trump administration’s disregard for the First Amendment continued as he invited evangelical leaders to the White House for what amounted to an official state dinner. He warned of violence to the Religious Right if they don’t turn out for the November midterms and continued to peddle the lie that he overturned the Johnson Amendment, which is categorically untrue, as FFRF’s successful litigation has proved. The bizarre spectacle was an advertisement for the necessity of state/church separation. 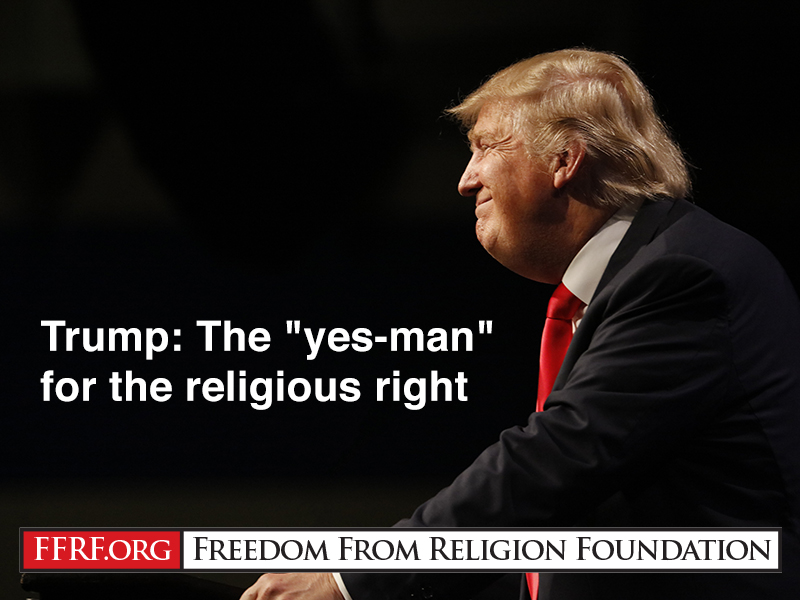 Ohio county’s focus on prayer has FFRF saying ‘Don’t you dare!”
The Meigs County (Ohio) Board of Commissioners apparently needs to be reminded of its secular duties after it was reported to FFRF that it consistently promotes religious messages on its official social media accounts, invokes prayer at public meetings, and is sponsoring a National Day of Prayer event. FFRF reminded the board that their office belongs to “We the People,” not the office’s temporary occupants.

Religious camp retreat is something school shouldn’t repeat
In one of the more egregious public-school complaints we have received, we learned of a charter school in Colorado Springs sending its sixth-graders to a three-day retreat at a religious camp, whose mission statement is “sharing God’s Grace and Glory through His creation.” FFRF asked it to stick to the side of constitutionality and cancel the upcoming September trip and to host it at secular locations in the future.

Freethought Radio, a religion-free zone, this week features Sweeney and Stone
This week on FFRF’s Freethought Radio, FFRF Co-Presidents Annie Laurie Gaylor and Dan Barker  analyze the outrageous remarks President Trump delivered before evangelicals at the White House, describe FFRF’s new ad in The New York Times, play a clip of comedian Julia Sweeney from FFRF’s “Freethought Matters” TV show, and talk with William C. Stone, the lead attorney in the historic 1980 Supreme Court case Stone v. Graham, which declared the posting of the Ten Commandments in public schools to be unconstitutional. Stone has been an FFRF member for many years.

Attention, attention! Come to our convention!
With September upon us, the window of opportunity is closing to snag your spot at the FFRF annual national convention in San Francisco. Join us the weekend of Nov. 2-4 to hear from a killer line-up of thinkers, writers, entertainers and activists, including Salman Rushdie, Cecile Richards, Adam Savage, Julia Sweeney, John de Lancie and U.S. Rep. Jared Huffman. 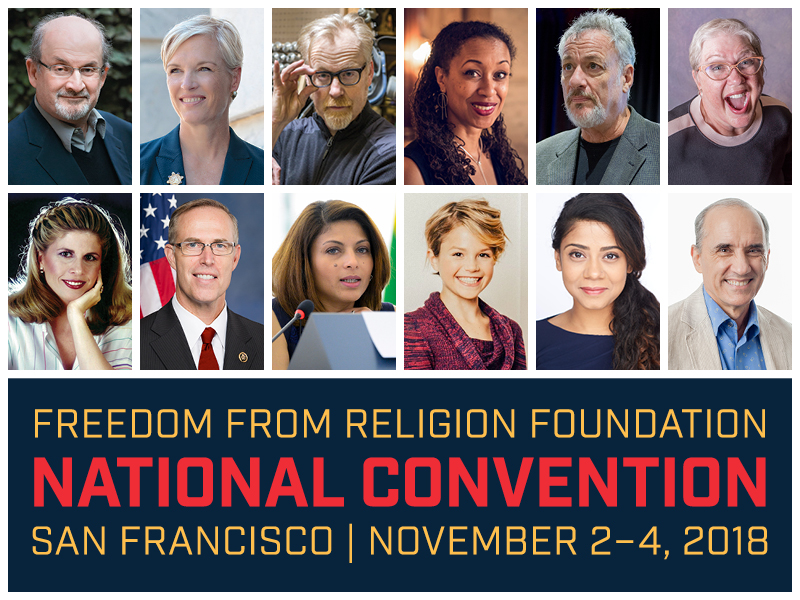 Well, that’s it for the wrap, folks. Many thanks to you, our members, who remain the driving force behind our productive weeks in the fight to maintain the separation of state and church. Have a wonderful Labor Day weekend!

All Articles by this author
PrevPreviousA week to remember
NextGetting honored, combating Kavanaugh — and so much elseNext