An unexpected visit to the ‘Scopes monkey trial’ site

Anyone who knows me can attest that I love a good road trip. And it doesn’t necessarily have to be anywhere exotic for it to be a worthwhile journey for me.

Needless to say, 2020 has put a damper on travel. However, there still lingers that itch to get in the car and go somewhere. After considering how and where we could road trip safely, thoughtfully and responsibly, my husband and I found a cabin in remote Alabama. We mapped it out so that we could do the Civil Rights Trail along the way, and we made sure to pack the car with gloves, sanitizer, masks and ample groceries and water.

The Civil Rights Trail is incredible — and I highly recommend it. Stopping in front of the home of the slain civil rights champion Medger Evers, seeing the Greyhound bus station where so many heroically challenged interstate segregation laws, and walking across the bridge in Selma is both awe-inspiring and quieting. 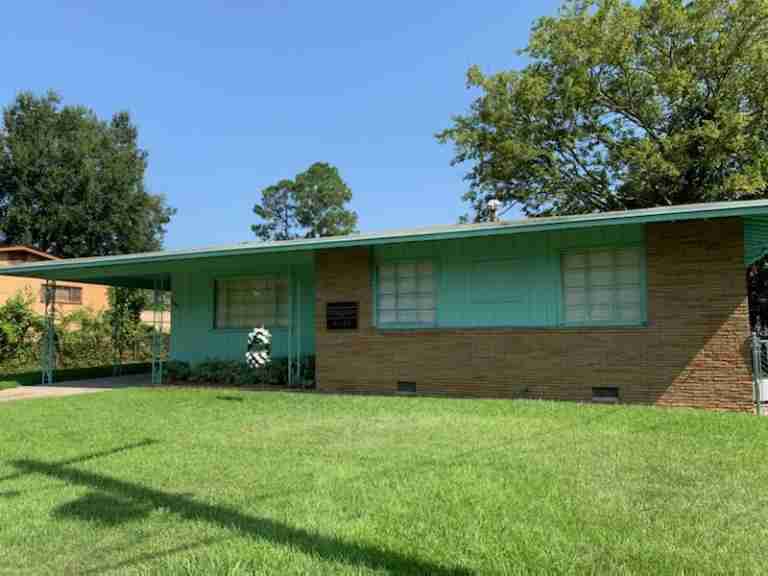 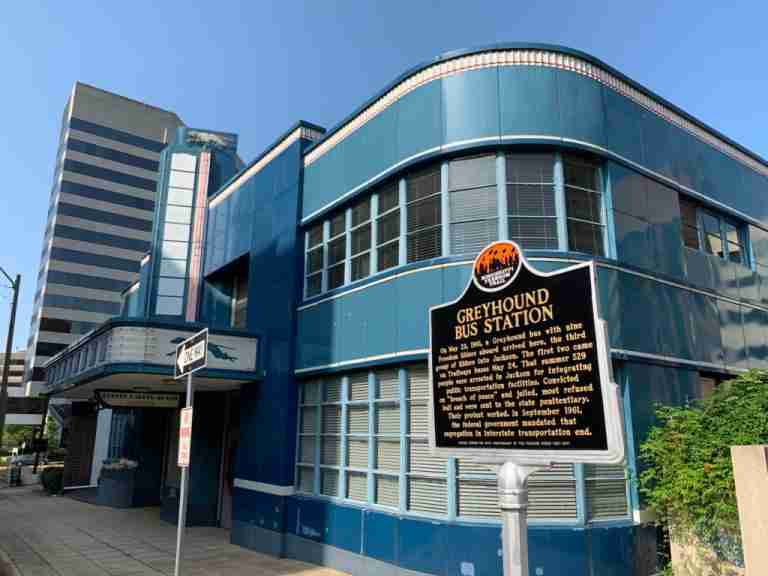 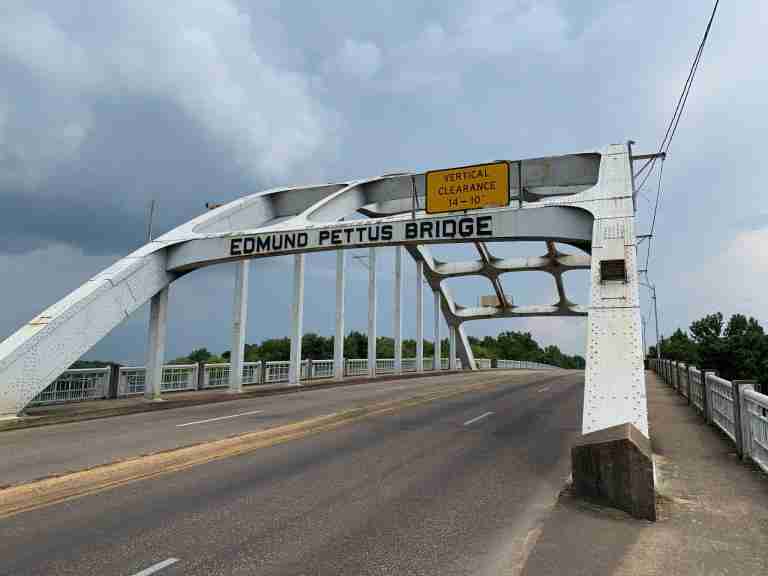 At the cabin, we spent several days on the lake, reading, relaxing and eating s’mores. The night before we were set to return, we mapped our journey back north through Tennessee. Scanning our route on the mobile map, I noticed the town of Dayton pop up. Where had I heard of that town before? A cursory Google search revealed that Dayton, Tenn., was the site of the famous Scopes trial.

The state of Tennessee v John Thomas Scopes, colloquially referred to as the “Scopes monkey trial,” continues to be one of the most well-known court cases in U.S. history. The Butler Act, a Tennessee law passed in March 1925, forbade the teaching of evolution in all “universities, normals,and all other public schools of Tennessee, which are supported in whole or in part by the public school funds of the state.” The law claimed that evolution denied “the story of the Divine Creator of man as taught in the Bible.” Teachers were to be penalized for imparting the concept to their students. What ensued was a battle over teaching evolution in the classroom — and an epic showdown between state and church.

Excitedly, I added the town to our “must-stop” list. I found a guide to the people and places of historic Dayton and spent the final night in the cabin watching “Inherit the Wind,” with Spencer Tracy, Fredric March and Gene Kelly.

About 40 miles northeast of bustling Chattanooga rests Dayton, a quiet town of approximately 7,000 people seated in Rhea County. When we arrived, it was an early Saturday morning. The main street, which dots the historic center with shops, offices and a bank, hadn’t woken up yet. Nary a car drove by and only a few residents could be seen sipping coffee on their front porch.

Much of this solitude is undoubtedly reminiscent of the town in 1925. After the Butler Act was passed, the American Civil Liberties Union sought to challenge this religious law by sending out press releases that offered to legally defend any teacher who defied it. Meanwhile, businessman George Rappleyea of Dayton was looking for a way to bring much-needed publicity and money to the quiet town. He consulted with Frank E. Robinson, known as “The Hustling Druggist,” then the president of the school board and owner of a local drug store. His house rests at the corner across from the courthouse. 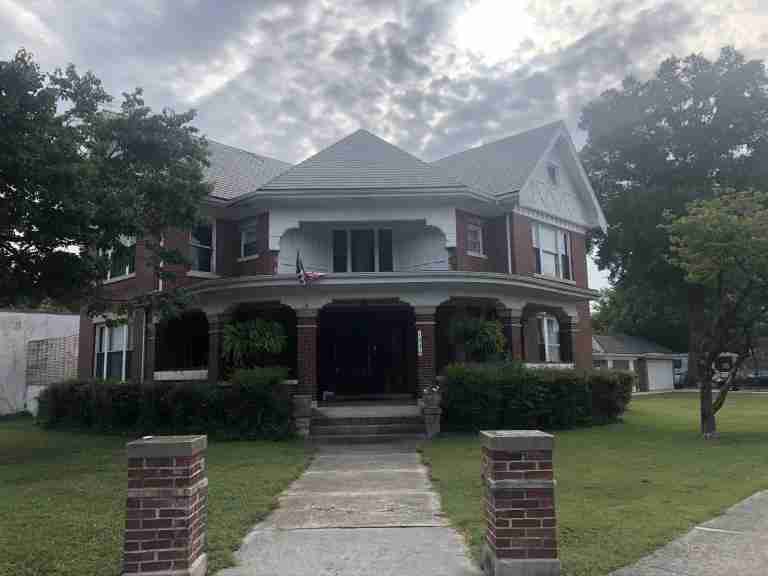 After meeting with the school’s superintendent, Rappleyea found a candidate in John T. Scopes, a meek science teacher at Rhea County High School. On May 7, 1925, Scopes was arrested. After a grand jury meeting, the trial proceeded on July 10.

I’m a person who’ll also stop at cheesy roadside attractions, in addition to historic sites and state and national parks. I suppose this means that I would’ve been a prime target for the Scopes spectacle, which was a media sensation and business boon as thousands flocked to “Monkey Town.”

W.C. Bailey’s Boarding House was the place that Scopes stayed during his first year of teaching in Dayton. Joe Mendi, a performing chimpanzee brought to Dayton as a traveling attraction, also stayed at the house, which, according to my travel guide, is now a law office. 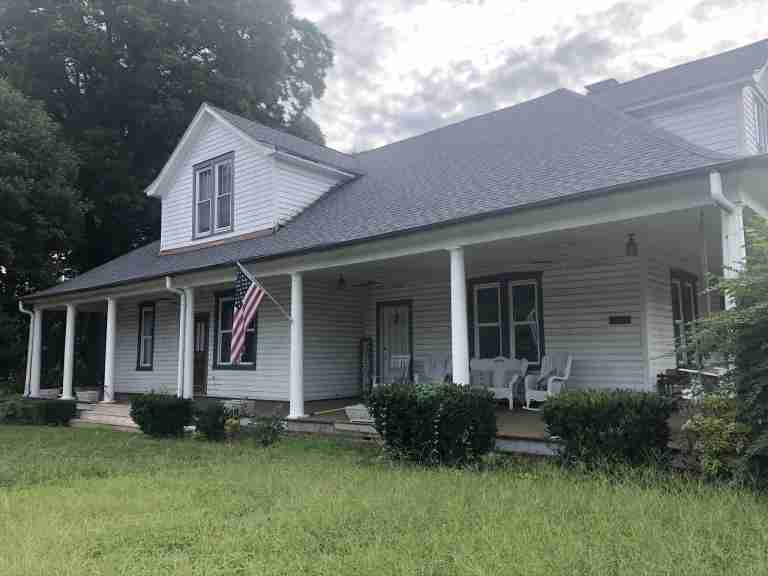 Among the hundreds of journalists who flocked to Dayton to cover the trial was H.L. Mencken, a pundit who coined the term “Bible Belt” and described himself as “absolutely devoid of what is called religious feeling.” Staying a few blocks from the trial, Mencken was largely cynical of the town and its people, believing that the guilty verdict was predetermined. Departing the town before the trial even concluded, Mencken lamented, “Let no one mistake [the trial] for comedy, farcical thought it may be in all its details. It serves notice on the country that Neanderthal man is organizing in these forlorn backwaters of the land, led by a fanatic, rid of sense and devoid of conscience.”

The home that the famed journalist stayed in is still standing. It exists today as an office. 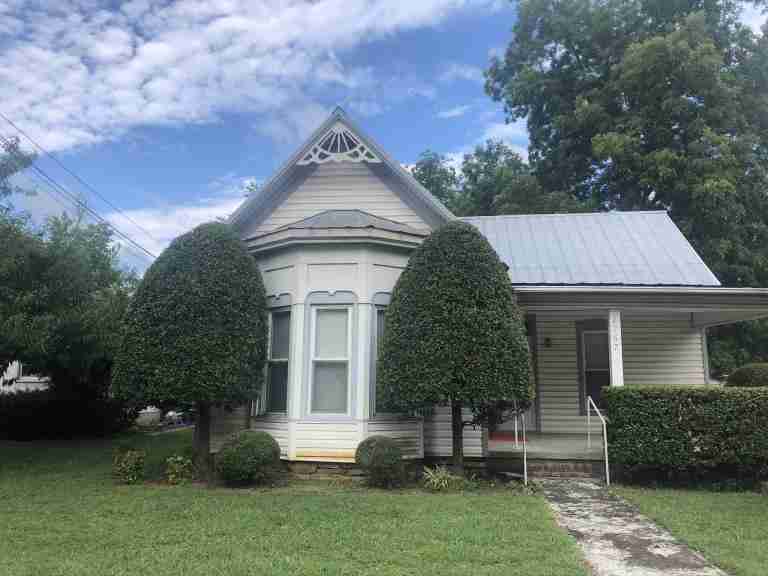 Amid the quaint and unimposing scenery stands a proud courthouse where the contentious battle between religion and secularism took place. Two statues appear as you approach the Rhea County Courthouse: one of William Jennings Bryan and the other of Clarence Darrow. 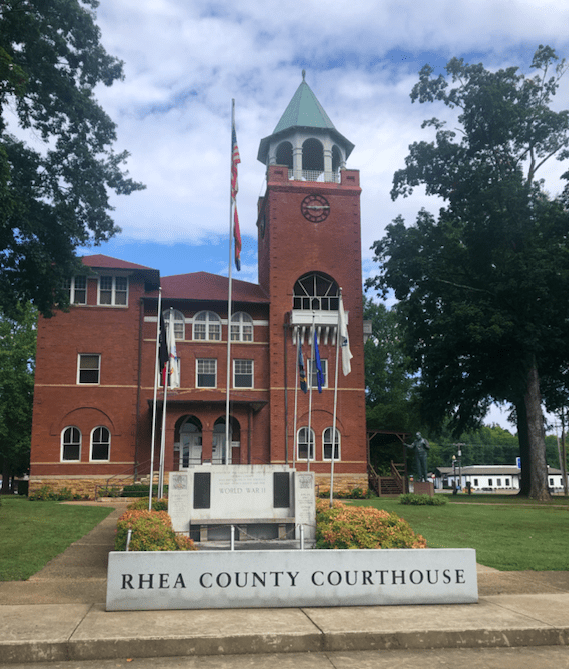 For the prosecution was William Jennings Bryan, a former U.S. secretary of state and an ex-congressman from Lincoln, Neb., who had three presidential nominations under his belt. A progressive who had championed women’s suffrage, Bryan’s devotion to religion caused him to become a fierce advocate against the teaching of evolution by 1921. Bryan asserted that “evolution is the merciless law by which the strong crowd out and kill off the weak” and that the bible reflected “the law of love.” (Bryan’s comparison of evolution and the bible is curious as the god of the bible routinely ordered mass killings, including 24,000 Israelites.) 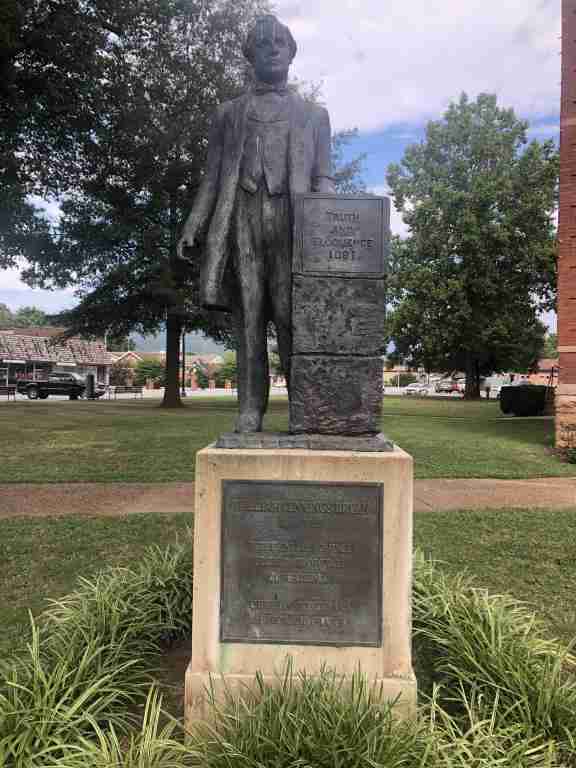 Clarence Darrow led the defense team. An attorney and prominent member of the ACLU, Darrow was also a labor organizer and a freethinker. Although Darrow and Bryan had many commonalities in terms of civil rights policies (Darrow had even supported Bryan in his first presidential campaign), they had fundamental differences over religion, especially over state and church. 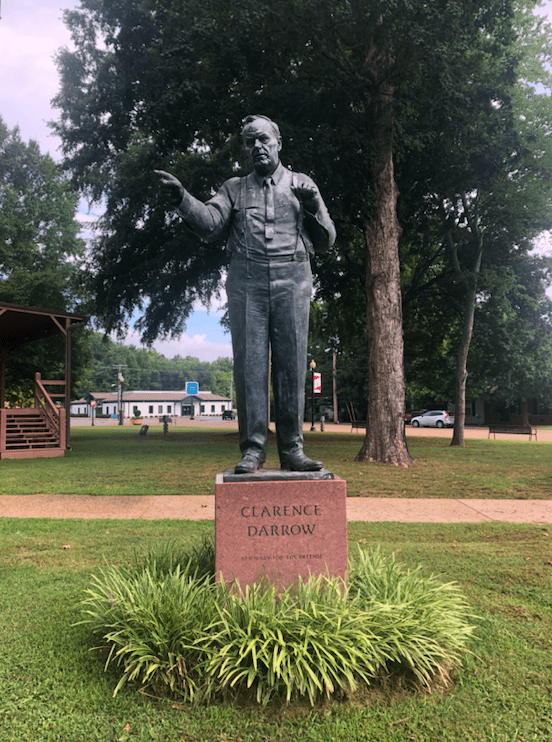 Looking at the statues, one can tell that they weren’t crafted by the same sculptor, since the likeness of Bryan is crudely fashioned, picturing him as a young man. The other is an amazingly lifelike rendition of Darrow during the trial, complete with his signature forelock askew. On a side of the base is a bas-relief rendering of the “frenemies” together. I later learned that the statue of Bryan was donated by Bryan College in 2005. Notably, Bryan stood alone until the Freedom From Religion Foundation fundraised and erected a statue sculpted by Zenos Frudakis of the famed attorney three years ago. As a new intern for the Freedom From Religion Foundation, this made the spontaneous visit even more worthwhile. 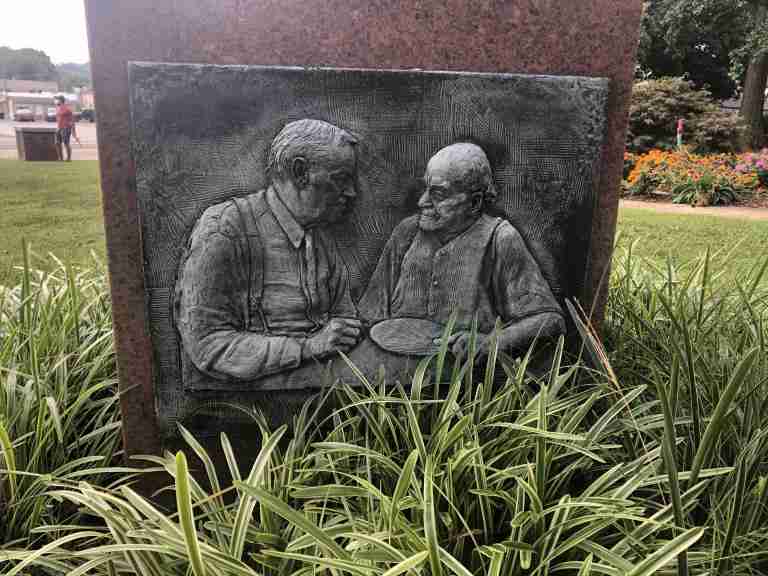 The Scopes trial endured over eight days and was a media sensation. On the seventh day of the trial, on the front lawn of the courthouse, Darrow questioned Bryan on the literal interpretation of the bible. The following day, the jury, after eight minutes of deliberation, handed down a guilty verdict to Scopes, who was forced to pay a $100 fine. Two years later, the Tennessee Supreme Court overturned this verdict on a technicality.

The media circus is long-gone, but a museum in the basement of the courthouse continues to memorialize the famous trial. 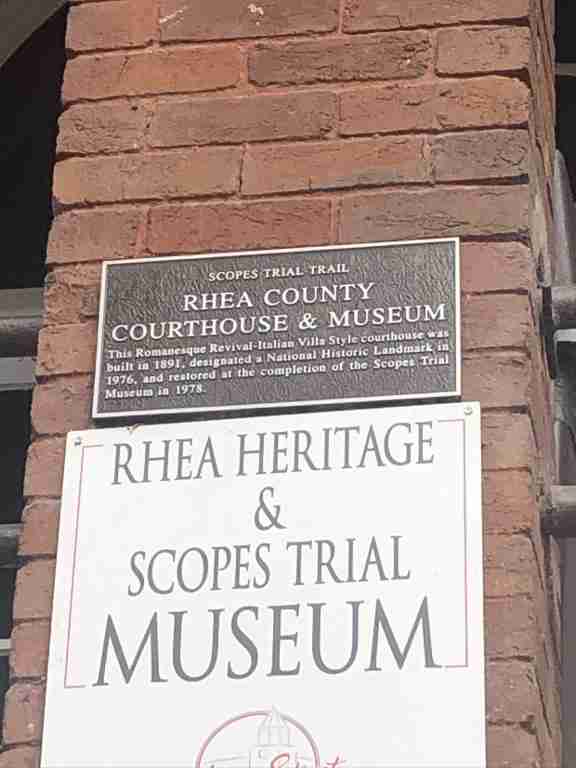 On our trip back home, I couldn’t help but think of the continued relevance of the trial and of the countless examples of Christian Nationalism permeating the classroom. For example, in February, a Florida Senate panel backed the “Parents’ Bill of Rights” to allow parents to keep their children out of class on days when topics like evolution, climate change, and sex education are taught. Meanwhile in West Virginia, state senators passed a bill that would require local county boards of education to offer an elective on instruction of the bible in public high schools.

The battle for science and secularism promises to be a long-drawn one. As we collectively work for the separation of state and church, Clarence Darrow’s words, spoken on July 15, 1925, at the trial, remain as salient as ever: “I do not consider it an insult, but rather a compliment to be called an agnostic. I do not pretend to know where many ignorant men are sure — that is all that agnosticism means.” 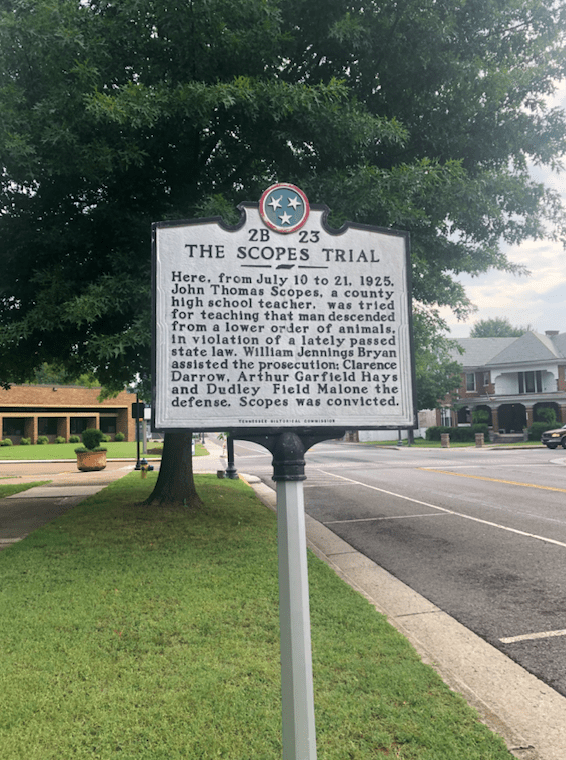 BARBARA ALVAREZ is a contributing writer for the Freedom From Religion Foundation. Previously she had held the role as FFRF's inaugural Anne Nicol Gaylor Reproductive Rights Intern, a program set up to memorialize FFRF’s principal founder, who was an early abortion rights activist and author of the book Abortion is a Blessing. Barbara was a major winner in FFRF’s essay competition for graduate students, writing about the bible’s role in the abortion battle.
All Articles by this author
PrevPreviousWhy there’s mainstream silence about freethinkers
NextOur annual meeting, an uncertain transition, the Scopes trial & Vatican abuseNext