Skip to content
PrevPreviousCatholic hypocrisy, Satanists, and the body of Christ
NextChristian privilege and the “desecration” of a Jesus statueNext

Last month, I wrote about Elisabeth Hasselbeck’s attempt to equate the persecution of Christians in places like Iraq, with the Navy removing bibles from its hotel rooms on the recurring Fox News segment, “The Fight for Faith.” A few days ago, we saw something even more inane on the segment, a pastor and former (thanks to FFRF) public school chaplain expounding on constitutional interpretation. 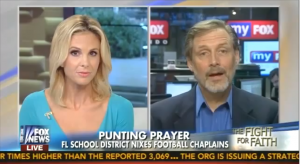 Hasselbeck began the interview with Troy Schmidt, noting that FFRF got him removed from Orange County Public Schools: “It’s unconstitutional — is what [the] Freedom From Religion [Foundation] said — for you to gather with the team and pray with them and befriend them. You say?”

Schmidt responded by trying to claim that the First Amendment gives him the right to enter public schools and preach to other people’s children: “Well, I don’t think they’ve read the Constitution. I think it’s pretty clear that they cannot prohibit my free expression of my faith or the free expression of the coaches to express their faith. They’re telling us to be atheists, when we’re saying, this is what we want to believe, and we want to express it freely like the Constitution says.”

Mr. Schmidt, there are many things wrong with that statement. So many things that I can only hope you were succumbing to the sensationalist instinct that seems to motivate Fox News’ reporting. (Fox News national does not seem interested in contacting FFRF for our side of the story, including this interview. I imagine having that opposing view spoken on their program would interfere with their spin.)

First, FFRF exists to uphold the separation of state and church embodied in our First Amendment. As the constitutional attorney who wrote the letter which led Orange County to abolish your position, I can assure you that I’ve not only read the First Amendment, but also studied it in depth. But thank you for providing an excellent example of the Dunning-Kruger effect.  This psychological phenomenon postulates that individuals unskilled or ignorant in an area suffer from an illusory superiority. In other words, people who don’t understand a subject tend to think they understand it better than the experts. The Constitution is not like your bible; you cannot just invent interpretations for your theocratic urges.

Third, the First Amendment does not give coaches the right to impose their religion on students either. Coaches are government employees. When they are acting as coaches, they are the government and bound by the Establishment Clause. This means that they cannot encourage, organize, or participate in prayers while they are acting as coaches. When they get home they can pray. On the weekends they can pray. But when they’re coaching, they must coach a sport, not their personal religion.

Interestingly, the Eleventh Circuit Court of Appeals (which includes Florida) has dealt with this exact issue. In Bishop v. Aronov, the University of Alabama ordered a teacher, Dr. Bishop, to stop injecting religion into his classroom. Bishop lost a free speech lawsuit challenging the university’s order. Bishop told his students:

“[I] personally believe God came to earth in the form of Jesus Christ and he has something to tell us about life which is crucial to success and happiness. Now this is simply my personal belief, understand, and I try to model my life after Christ, who was concerned with people, and I feel that is the wisest thing I can do. You need to recognize as my students that this is my bias and it colors everything I say and do.” 926 F.2d 1066, 1068 (11th Cir. 1991).

The university’s order telling Bishop to stop injecting his religion into the public university classroom was held to be constitutional. The court specifically upheld the university’s order that the professor “separate his personal and professional beliefs and that he not impart the former to his students during ‘instructional time’ or under the guise of the courses he teaches in so-called optional classes.” Id. at 1071. The court was “not persuaded that, even in the remotest sense, Dr. Bishop’s rights of free exercise or worship as those concepts are comprehended in constitutional parlance are implicated.” Id. at 1077. Other courts have made identical findings. See, e.g., Borden v. Sch. Dist. of the Township of East Brunswick, 523 F.3d 153, 174 (3rd Cir. 2008), cert. denied, 129 S.Ct. 1524 (2009) (declaring the coach’s organization, participation and leading of prayers before football games unconstitutional and not granting his free exercise claims).

Your free speech and free exercise rights are not, “even in the remotest sense,” violated by Orange County Public Schools’ correct decision to abolish your position as chaplain.

Fourth, nobody is telling you to be an atheist or an atheist chaplain. Requiring public school employees and volunteers to remain neutral on matters of religion is not atheism. A coach telling students that they ought to believe there is no god is atheism — and such a statement is also prohibited by the wall of separation between state and church.

Personally, I think you would lead a happier, more fulfilled life without an all-seeing dictator cataloguing your every fault and without Jesus’ threat of eternal punishment weighing you down, but you are free to believe anything you like. You can believe that gods impregnate women, like the Greek myths, or that people rise from the dead, like the current zombie fad. Both you and the coaches can say anything you want in forums such Fox News, with little or no regard for the truth. But you cannot use the machinery of the state to preach those views to a captive audience of public schoolchildren. 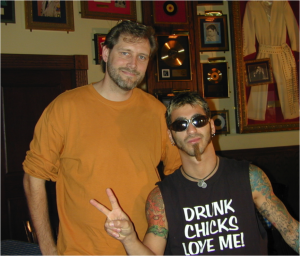 Andrew L. Seidel is a constitutional attorney and the Director of Strategic Response at the Freedom From Religion Foundation. His first book The Founding Myth: Why Christian Nationalism Is Un-American was burned by a Tennessee preacher. His second book, American Crusade: How the Supreme Court is Weaponizing Religious Freedom, is due out in 2022. He's won numerous academic awards and holds two law degrees: a J.D. magna cum laude from Tulane University Law School and an L.L.M. from Denver University’s Sturm College of Law. Andrew has a B.S. in neuroscience and environmental studies from Tulane. Before dedicating his life and law degree to keeping state and church separate, Andrew was a Grand Canyon tour guide and an accomplished nature photographer. Andrew has appeared on Fox News to debate Bill O’Reilly, MSNBC, and hundreds of other media outlets speaking on behalf of FFRF.
All Articles by this author
PrevPreviousCatholic hypocrisy, Satanists, and the body of Christ
NextChristian privilege and the “desecration” of a Jesus statueNext