An Open Letter to Okla. Attorney General Scott Pruitt on the Ten Commandments

“As Oklahoma’s highest law enforcement officer you ought to be saying ‘good riddance’ to the bad rubbish this monument represents, not promising to repeal part of Oklahoma’s law.” 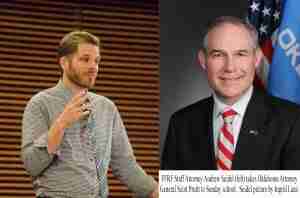 We’ve tangled several times before. Once regarding a Christian men’s club using Oklahoma public schools to distribute their particular version of the bible, an illegal act that you publicly defended. And then regarding your demand to see documents relating to the IRS and FFRF settling a lawsuit that are publicly available on FFRF’s website, www.ffrf.org. Perhaps you were so upset by the news that the IRS would enforce the rules by which it is governed that you missed all the documents. If so, here they are.

I write this letter to correct yet another misunderstanding, this time regarding the Ten Commandments. After the Oklahoma Supreme Court declared the decalogue monument on capitol grounds unconstitutional, you said, “Quite simply, the Oklahoma Supreme Court got it wrong. The court completely ignored the profound historical impact of the Ten Commandments on the foundation of Western law.”

That assertion is indefensible. There is not a single legal principle that is either unique or original to the Ten Commandments that significantly influenced American law.

First, let’s identify which set of Ten Commandments that were allegedly part of our foundation. Is it the set in Exodus 20 or Exodus 34? Or perhaps it’s the sets in Deuteronomy 5 or Deuteronomy 27? For the sake of argument, I’ll assume it’s the set on the Oklahoma capitol lawn.

This is a big assumption because, as anyone who’s familiar with the bible will realize, the wording on the capitol monument is heavily edited. The monument’s precepts appear to come from Exodus 20, but apparently the original version was too barbaric (or perhaps the monument authors simply know better than god.) Either way, the monument strays heavily from the original.

For instance, the monument leaves out some integral language from the second commandment—the prohibition on graven images. The original includes, “for I, the Lord your God, am a jealous God, punishing the children for the sin of the parents to the third and fourth generation…” Please tell me, Mr. Pruitt, is punishing innocent children, grandchildren, and great-grandchildren for the crimes of their parents what you meant by “foundation of Western law?”

If not, then perhaps you were referring to the implicit blessing of that most holy institution, slavery, which is referenced in both the fourth and tenth commandments (but is again omitted from or altered on this monument)? The tenth commandment also treats women as property, lumping them in with cattle and slaves, something the monument authors did not think worth changing.

Surely you can’t mean that the first four commandments, which have nothing to do with morality and actually prohibit the free exercise of religion, are the basis of western law? Nor could you mean that prohibitions on coveting—commandments 9 and 10 on the monument—are the foundation of western law because they amount to criminalizing thought. And as you must know, freedom of thought is protected absolutely under our First Amendment.

The process of elimination tells me that you must be referring to the prohibitions on murder, theft, lying, and adultery. But these commandments are not original or unique to Judeo-Christianity. These are universal, human principles that virtually every successful society has implemented. Even the Ten Commandments were not telling the Israelites something new. Surely you aren’t contending that the chosen people thought murder, theft, and lying perfectly acceptable before a burning bush told them otherwise?

If you are arguing that your particular brand of religion is responsible for the universal prohibitions of these rather obvious wrongs, then your religiously motivated arrogance has gotten the better of you.

Which of the Ten Commandments are, as you claimed, the basis of Western law? I eagerly await your response.

Andrew L. Seidel is a constitutional attorney and the Director of Strategic Response at the Freedom From Religion Foundation. His first book The Founding Myth: Why Christian Nationalism Is Un-American was burned by a Tennessee preacher. His second book, American Crusade: How the Supreme Court is Weaponizing Religious Freedom, is due out in 2022. He's won numerous academic awards and holds two law degrees: a J.D. magna cum laude from Tulane University Law School and an L.L.M. from Denver University’s Sturm College of Law. Andrew has a B.S. in neuroscience and environmental studies from Tulane. Before dedicating his life and law degree to keeping state and church separate, Andrew was a Grand Canyon tour guide and an accomplished nature photographer. Andrew has appeared on Fox News to debate Bill O’Reilly, MSNBC, and hundreds of other media outlets speaking on behalf of FFRF.
All Articles by this author
PrevPreviousWhy I find it hard to laud pope’s ‘Laudato’
NextACLU joins FFRF in ranks of groups opposed to Religious Freedom Restoration ActNext