American politicians use the bible to justify atrocities … again

American history consistently features preachers and politicians thumping the bible to rationalize atrocities. From the First Congress up through the Civil War, American politicians used the bible to justify slavery. Even before that, the Puritans justified the genocide of the Pequots on biblical grounds. The bible was used to argue for segregation as much, if not more, than it was used to argue against segregation.

On Thursday, Attorney General Jeff Sessions and White House Press Secretary Sarah Huckabee Sanders continued that long, shameful tradition. Both invoked the bible to defend the Trump administration’s new policy of separating children from their parents at the border. 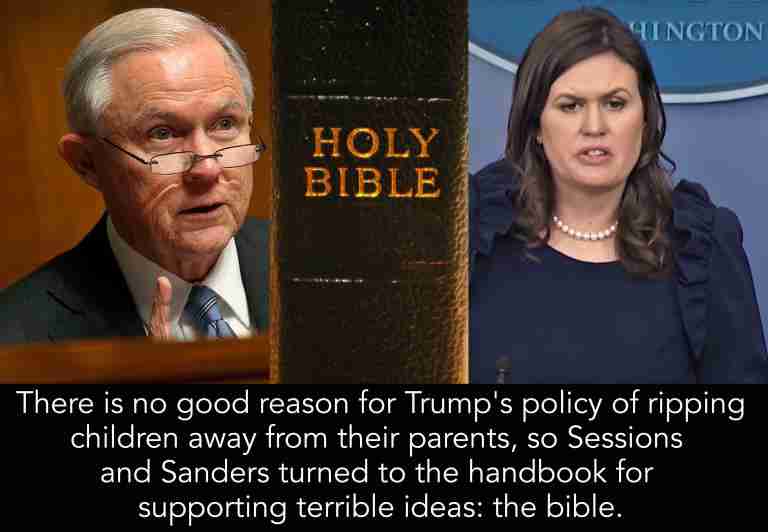 Biblical justifications have no place in our secular government

The comments fell like a bomb that ignited an anachronistic theological debate about what the bible actually says on topics such as immigration, parental rights and abiding by the law.

But that debate, which is interesting and which I’ll join in a moment, is entirely beside the point. Under our Constitution, which separates state and church, the bible is not a legitimate justification for any action our government takes. In fact, the Supreme Court has said that if a government action lacks a secular purpose (i.e., it has a religious purpose) that action is unconstitutional.

If the only justification for a government policy is religious, that is not a secular law appropriate for our secular government; that’s a religious law appropriate only for the administration of churches or religious orders. Religious justifications only make sense to the people of that particular sect. To everyone else, they are often nonsense (imagine a law that protected communion wafers, which Catholics believe to be “living flesh,” the way Catholics wish fetuses were protected).

Even without the obvious harm in this particular instance — it’s monstrous to separate children from their parents — basing secular laws on religious a rationale is damaging because nonadherents begin to lose respect for all the laws, not just the laws reflecting holy gibberish. The Rawlsian ideal of Public Reason, for instance, ought to be the basis for legislation in a secular republic, not the bible.

The bible cannot justify the actions of our secular government, but it’s unsurprising that it’s being invoked to defend this clearly indefensible and inhumane practice. The bible is nothing if not inhumane.

The bible advocates atrocities far worse than what is happening at the U.S. border

There is not a single good reason for Trump’s new practice, so Sessions and Sanders turned to the handbook for supporting terrible ideas: the bible.

Are there some nice passages in the bible? Yes, there are. But the bible is a collection of 66 books. Or 24 books. Or 81 books. It depends on your religion and your bible. It’s the product of countless authors, scribes, editors and translators. To pretend that it is internally consistent or coherent is to ignore literature’s worst case of multiple personality disorder.

If the bible can be used to support any and every position on a given topic, it is an entirely worthless guide. This is especially true when it comes to moral questions. Grounding your moral argument in the bible is like building a house on sand. It’s foolish. It reflects a morality that humanity has outgrown. Without fail, the regressive side of any moral argument has better biblical justifications.

Want to argue that slavery is just fine? Check out the Ten Commandments. Slavery is sanctioned in there. Twice. What to justify genocide and conquest? The Book of Joshua is for you. Think women should know their place? The New Testament makes a fine collaborator.

Can people cite passages with contrary ideas? Sure. But the bible is no friend to families or children.

By biblical standards, Trump’s policy is mild. The bible not only condones “seizing infants” but also promises happiness to the snatchers if they murder the infants: “Happy is the one who seizes your infants and dashes them against the rocks.”

After they wiped out the Midianite men, Moses commanded his soldiers: “Now kill all the boys. And kill every woman who has slept with a man, but save for yourselves every girl who has never slept with a man.”

That’s not an isolated slaughter of children. “The LORD” told Samuel to “go and smite Amalek, and utterly destroy all that they have, and spare them not; but slay both man and woman, infant and suckling …” Elijah, a prophet, summoned bears to maul and kill “little children” who “mocked [his] bald head.”

Remember too that, like Sarah Sanders and Jeff Sessions, Jesus approves of obeying the old laws, including the laws that precipitated the above atrocities.

Separating children from their parents is barbaric in every sense. But that policy is positively tame next to the god in the bible. The biblical god murders children.

Humanity outgrew the bible centuries ago. It belongs in our libraries and our museums, not the halls of government or the pockets of border patrol agents. The sooner we recognize that we are better than this book, the better we will become as a nation. America doesn’t need the bible; the bible is holding America back.

Andrew L. Seidel is a constitutional attorney and the Director of Strategic Response at the Freedom From Religion Foundation. His first book The Founding Myth: Why Christian Nationalism Is Un-American was burned by a Tennessee preacher. His second book, American Crusade: How the Supreme Court is Weaponizing Religious Freedom, is due out in 2022. He's won numerous academic awards and holds two law degrees: a J.D. magna cum laude from Tulane University Law School and an L.L.M. from Denver University’s Sturm College of Law. Andrew has a B.S. in neuroscience and environmental studies from Tulane. Before dedicating his life and law degree to keeping state and church separate, Andrew was a Grand Canyon tour guide and an accomplished nature photographer. Andrew has appeared on Fox News to debate Bill O’Reilly, MSNBC, and hundreds of other media outlets speaking on behalf of FFRF.
All Articles by this author
PrevPreviousPoliticians preach Christian nationalism at the Southern Baptist Convention
NextWe’re well prepared (and in a good mood)Next