We here at Freedom From Religion Foundation have been causing quite a commotion this week.

Our intervention in the Amber Guyger case, where a Dallas police officer was convicted of killing a man in his own apartment, grabbed social media (we trended on Twitter) and headlines.

“The Freedom From Religion Foundation has filed a letter of complaint with a Texas judicial conduct commission against a Dallas judge for offering a bible to former police officer Amber Guyger after sentencing her for the murder of her neighbor, Botham Jean,” reported Religion News Service, one of the many media outlets to carry the news. “The actions of Judge Tammy Kemp of Texas’ 204th District Court were captured on video Thursday (Oct. 3) shortly after Kemp sentenced Guyger to 10 years in prison.”

As FFRF Director of Strategic Response Andrew Seidel explains in our “Newsbite” segment, we are all for empathy in the justice system, but the judge, in bringing so much of her personal religion into the classroom, completely crossed the line. 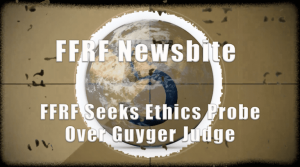 The Kentucky guv is (again) over the top
Our objection to the Kentucky governor exhorting all of his state’s students to bring their bible to school also got media attention, including on Fox News.

“‘Students, of course, have the right to bring their bible to school on this or any other day,’ Elizabeth Cavel, associate counsel for FFRF, told Fox News,” reported the network (incidentally misspelling Elizabeth Cavell’s last name). “‘Public school teachers and administrators may not promote or encourage students to participate in religious events on this or any other day.’”

And certainly not the governor.

Stopping a prayer vigil
We caused enough of a stir down South to force an Alabama sheriff’s office to withdraw from a prayer vigil.

“After receiving a letter from the Freedom From Religion Foundation threatening a lawsuit if he participates in the vigil, citing a violation of the separation of church and state, Blount County Sheriff Mark Moon has decided to no longer participate in Wednesday’s vigil as part of the sheriff’s office,” reports a TV station.

We got several violations halted at a school district
Further north, we got a Missouri school district to end a number of violations, including Christian prayers at mandatory staff meetings, religious displays on district property and the teaching of creationism in its public school curriculum. The school district’s attorney sent a letter promising that all these violations would be rectified. “We commend the district for its thorough response to these widespread religious entanglements,” commented FFRF Co-President Annie Laurie Gaylor.

Our national billboard campaign
We’ve been able to get some attention to a recent nationwide billboard campaign (such as in Stanford University’s hometown) featuring freethinking students of color who won this year’s FFRF essay contest. Therrin Wilson, a student at the University of Tennessee, Knoxville, explains in the college paper as to why he thinks it important to be public with his nonbelief. “My story is proof that God is not needed to be happy or successful and that atheists are capable of having just as much (or more) moral authority as religious people claim,” he writes.

The fusion of Christian and Hindu Nationalism
We pride ourselves for being on top of the news, both domestically and internationally. So this week on our Facebook Live “Ask An Atheist” feature, we focused on a recent massive joint rally in Houston that President Trump and Indian Prime Minister Narendra Modi headlined exemplifying the melding of Christian Nationalism and Hindu Nationalism. I answered questions about the phenomenon from FFRF Attorney Elizabeth Cavell and our Facebook viewers. 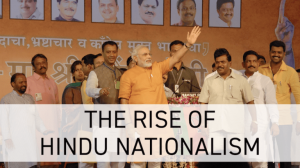 I had an op-ed on the subject that was sent out via the Tribune News Service and published in the Chicago Tribune, Newsday, the Seattle Times and several other papers.

Our radio interview with founder of Congressional Freethought Caucus
I also chatted with Annie Laurie on our radio show this week about the topic. We then featured an interview with none other than U.S. Rep. Jared Huffman, in which he talks about being an ex-Mormon, the inside story on congressional issues regarding separation of state and church, and why he founded the Congressional Freethought Caucus. https://ffrf.org/news/radio

A philosophical television treat for you
It was a congressional week for us. Our hometown member of Congress Rep. Mark Pocan dropped by at our office to record at our studio an interview for our television show “Freethought Matters.” It will be broadcast in a few weeks. 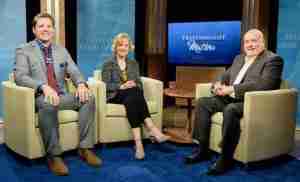 In the meantime, we have a real treat for you. Annie Laurie and FFRF Co-President Dan Barker interview the world-renowned philosopher Daniel Dennett on the show this Sunday. Check out the timing for your city. Or you can catch it any time on our YouTube channel. 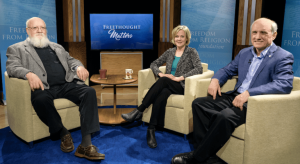 Keeping an eye on the Supreme Court
All of this stuff happening hasn’t taken our eyes off the ball. We’re keeping tabs on the U.S. Supreme Court’s new session starting on Monday and informing you (and the world) about important cases in the state/church realm.

FFRFers in Chicago for women of color freethought conference
Dan and Annie Laurie, along with FFRF Legal Director Rebecca Markert, will be down this weekend in Chicago at the Women of Color Beyond Belief Conference, which FFRF is co-sponsoring and conducting a focus group at. Do drop by if you’re anywhere in the Midwest.

Sign up for our convention!
Speaking of conferences, this is the last chance to pre-register for the FFRF convention, to be held in Madison, Wis., from Oct. 18-20. There’ll be some big names speaking there (such as New York Times best-selling writer Sarah Vowell and “The Family” author Jeff Sharlet). Don’t miss out! 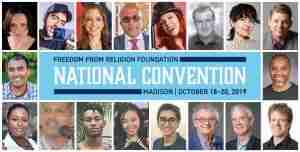 Conferences, cases, media, constitutional victories — there’s absolutely no way we’d be able to accomplish all of these if it wasn’t for you and your backing.