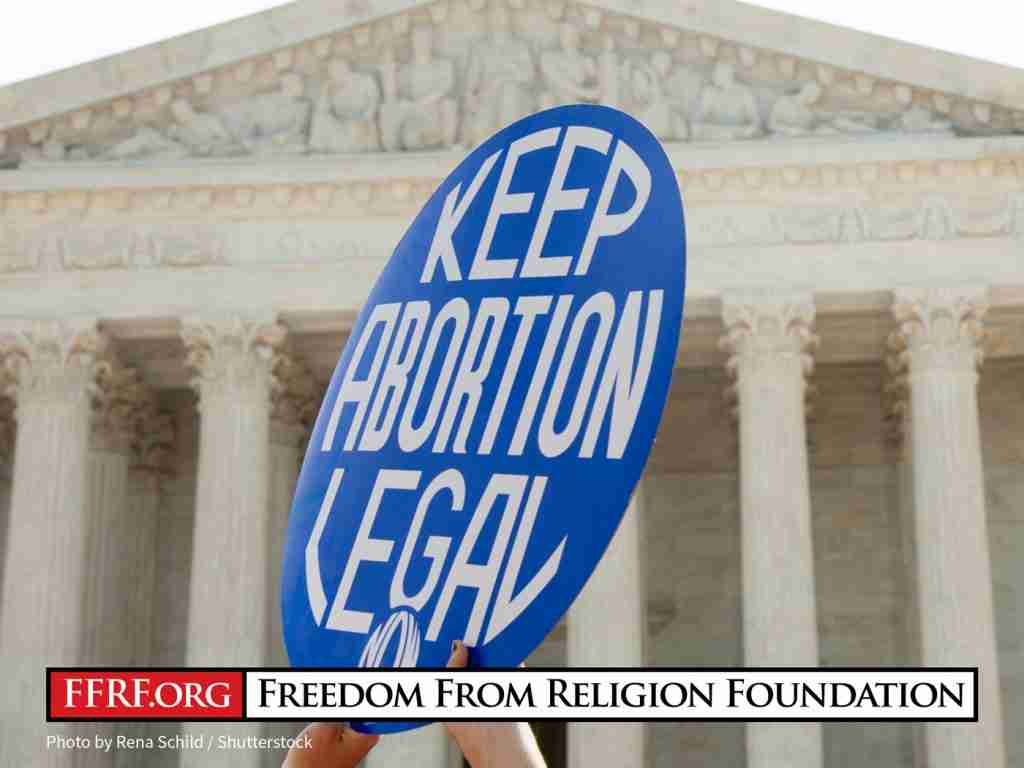 There is no medical or scientific reason to ban abortions. And yet, the future of abortions in the United States is extremely dire due to the impact of Christian nationalism on health care laws.

On Sept. 1, SB 8 became law, making Texas became the most hostile abortion state in the country. Under this draconian law, abortions after six weeks of gestation are now illegal. This is far before most women even realize that they are pregnant. As a result, 90 percent of abortions in the Lone Star State have been banned. Shockingly, the law also deputizes ordinary citizens to enforce it. Anyone who successfully sues an abortion provider or someone who assists another individual in getting an abortion, could be awarded at least $10,000.

Despite nearly 50 years of precedence, the ultraconservative Supreme Court refused to block the law in a 5-4 vote. In an unsigned explanation, the anti-abortion majority, which includes staunch Catholic conservative Amy Coney Barrett, vaguely stated that this refusal was “not based on any conclusion about the constitutionality of Texas’s law.” Instead, the court focused on procedural grounds, claiming that the petitioners, Planned Parenthood Federation of America, American Civil Liberties Union and the Center for Reproductive Rights, did not meet “their burden to prevail in any injunction or stay application.”

When this bill became law, Gov. Greg Abbott tweeted “God Bless Texas” and “No freedom is more precious than life itself. Starting today, every unborn child with a heartbeat will be protected from the ravages of abortion. Texas will always defend the right to life.”

This is a curious statement given the fact that while there have been nearly 60,000 deaths in Texas from Covid-19, Abbott has fought against life-saving masks and vaccines. Texas Right to Life, the religious extremist organization that was instrumental in crafting SB 8 and that describes itself as a group that “legally, peacefully and prayerfully protects the God-given Right to Life of innocent human beings from fertilization to natural death,” has already created a website in which individuals can submit anonymous tips about anyone who they believe is violating this cruel law. Travis County Attorney Delia Garza underscores the horror of this bill, explaining that “it could even allow a rapist to sue a doctor for providing care to a sexual assault survivor and for the rapist to recover financial damages — allowing predators to profit off of their assault.”

This Texas abortion ban upends decades of legal precedence related to fetal viability and the very foundation of Roe v. Wade, which legalized abortion until fetal viability. According to the court and medical experts, fetal viability is at 24-26 weeks of gestation. However, the Supreme Court had previously acknowledged medical determination is different for each pregnancy, including rare cases of later term abortions. The Supreme Court’s egregious refusal to uphold this precedent is particularly disturbing because of its hearing of a major anti-abortion challenge to Roe v. Wade in  Dobbs v. Jackson Women’s Health Organization, which concerns a Mississippi statute that bans most abortion care after 15 weeks of gestation. Other hostile abortion states will no doubt mimic the Texas abortion ban, resulting in even more harm to women.

Beyond legality, anti-abortion bans simply do not reflect science. Instead, they worsen maternal health outcomes. To begin with, the idea that fetal heartbeats exist at six weeks — a false argument of this Texas law — is simply not true. Indeed, the term “fetal heartbeat” is a fraudulent label that is intended to belie its anti-science roots. Dr. Ted Anderson, president of the American College of Obstetricians and Gynecologists, an organization representing 58,000 physicians in the United States, remarks that the phrase “fetal heartbeat” is a misnomer intended to belie its anti-science roots. Instead, Anderson explains that the pulsing is “electrically induced flickering of a portion of the fetal tissue that will become the heart as the embryo develops.”

Furthermore, science shows that abortion is an extremely safe procedure, especially when conducted early in a pregnancy. Indeed, 90 percent of abortions happen within the first 12 weeks of gestation. Major complications occur in less than a quarter of 1 percent. To put that in context, there are more complications from wisdom tooth removals and tonsillectomies than from abortions.

In fact, researchers have found that women are 14 times more likely to die during childbirth than they are from any abortion complications.  Studies have also shown that 99 percent of women who receive an abortion report that they feel relief, not regret. So by denying abortions after six weeks of gestation, the majority of women will not be able to seek abortion care in Texas. Instead, they will risk emotional and financial ruin by abortion bounty hunters while they seek alternative options.

Additionally, countries that have banned abortion prove that abortion restrictions do not reduce abortion rates. Instead, they make abortion care more dangerous. Instead of legally receiving a safe abortion within the first twelve weeks of gestation, women must find other avenues to an abortion. This has resulted in 23,000 preventable pregnancy-related deaths every year. Particularly in Texas, maternal deaths rose from 72 deaths per 100,000 live births in 2010 to 148 deaths per 100,000 live births in 2012 after abortion restrictions. The new abortion ban in Texas could further contribute to preventable deaths.

Limiting abortion access also contributes to poor maternal health outcomes. In fact, states with more abortion restrictions have higher rates of maternal and infant mortality. Structural racism contributes to those poor maternal health outcomes for women of color who experience higher levels of stress, discrimination, and exclusion from the health care system. The American Medical Association (AMA) has sued states that seek to enact abortion restrictions, stating that “the AMA will always defend science and open conversations about all health care options available to patients.” Furthermore, the U.N. Human Rights Committee has asserted that abortion is a human right. In fact, it has stated that denying abortion access is linked to discrimination and can constitute gender-based violence, torture, and/or cruel, inhuman and degrading treatment. Public opinion agrees, as 59 percent of Americans believe that abortion should be legal in all or most cases. Religiously unaffiliated individuals overwhelmingly support legal abortion at 82 percent.

Above all, abortion is health care and a human right.  Restrictions and abortion bans like SB 8 have no basis in science. They are solely driven by religious extremists who seek to impose their anti-science, anti-woman worldview on a secular nation. And believing that a human life begins at conception is a matter of faith — not fact. Curiously, “abortion” does not appear in any translation of the bible. Besides, we live under a secular constitution, not a theocracy. The separation of state and church, the right to privacy — and women’s health — demand that we protection abortion rights.

There has never been a more urgent time for Congress to pass the Women’s Health Protection Act, which would render these medically unnecessary anti-abortion measures null and void.  Please contact your representative and senators to ask them to sponsor and vote for the act.

Let’s send a clear message to Congress that secular voters stand for science and women’s rights.

BARBARA ALVAREZ is a contributing writer for the Freedom From Religion Foundation. Previously she had held the role as FFRF's inaugural Anne Nicol Gaylor Reproductive Rights Intern, a program set up to memorialize FFRF’s principal founder, who was an early abortion rights activist and author of the book Abortion is a Blessing. Barbara was a major winner in FFRF’s essay competition for graduate students, writing about the bible’s role in the abortion battle.
All Articles by this author
PrevPreviousThe clear differences between conservatives and liberals
NextFFRF salutes Hispanic Heritage MonthNext