Skip to content
PrevPreviousOur annual meeting, an uncertain transition, the Scopes trial & Vatican abuse
Next‘War on Christmas’ is in full swing, and this year it’s no jokeNext

Abortion as a state issue will endanger women’s rights 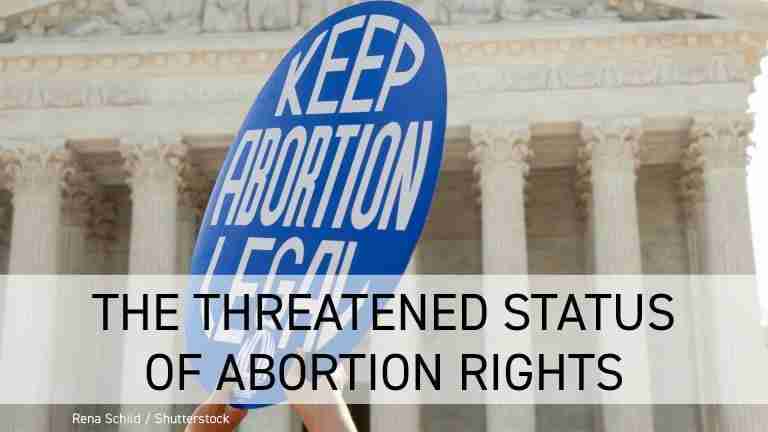 Abortion rights in this country may soon be determined on a state-by-state basis — to the detriment, potentially, of numerous women.

The Trump administration’s various attacks on reproductive health care have only been amplified by the appointment of anti-abortion Christian Nationalist Amy Coney Barrett to the Supreme Court. In a few weeks, the current ultraconservative court will decide whether to hear a case regarding Mississippi’s 15-week abortion ban. If the court takes the case and upholds this ban, it would signal to lower courts across the country that it would be willing to eradicate the central tenet of Roe v. Wade regarding abortion viability. Effectively, the landmark decision legalizing abortion could be rendered useless, if not eventually overturned.

If Roe is indeed overturned, 21 states have laws that could be used to criminalize or restrict abortion. For example, Wisconsin, the home state of the Freedom From Religion Foundation, is one of 11 states with pre-Civil War anti-abortion legislation on the books. If Roe falls, abortion will be immediately criminalized in Wisconsin — and doctors who perform them would be subject to prison terms.

So while the future of Roe v. Wade hangs in the balance, states are scrambling to update or enact new abortion-related legislation. Unsurprisingly, Religious Right legislators are moving to add anti-abortion language to their constitutions while other states are moving to codify abortion rights.

For example, Louisiana just passed an amendment to its constitution that explicitly states “nothing in this constitution shall be construed to secure or protect a right to abortion or require the funding of abortion.” The 6th U.S. Circuit Court of Appeals recently allowed the enforcement of a Tennessee law banning abortion on a prenatal diagnosis of Down syndrome. It’s important to note that these bans neither ensure that pregnant people are given information, resources and support to raise their children with dignity and nor do they expand access to necessary services and opportunities to protect people with disabilities from discrimination in education, housing, employment or medical care.

It’s good, on the other hand, to see that the Massachusetts Statehouse just approved a $46 billion budget, including a measure that would expand and codify abortion protections. In October, New Jersey legislators introduced the Reproductive Freedom Act, which would codify abortion care as essential to a woman’s “health, autonomy, and privacy,” reduce barriers to abortion access, and expand birth control and pregnancy-related care. And, thankfully, Coloradans rejected a ballot measure pushed through by religious anti-abortion groups that would have banned abortions at 22 weeks.

The state-level abortion restrictions have no foundation in science. Instead, they’re rooted in the religious motivations of anti-abortion extremists. In a secular nation, our laws related to health care should reflect science — and science shows that abortion is not only safe and effective but also a fundamental part of women’s health care. In fact, the greatest risk of abortion is delayed care and prohibition — both of which are pushed by anti-abortion religious groups and legislators. Additionally, countless studies have shown women are about 14 times more likely to die during or after giving birth than from complications of an abortion. Therefore, the state has no interest or business in obstructing abortion care.

The fraught future of abortion in the United States means that it is more important than ever that we hold our legislators accountable when any anti-abortion measures are introduced. We must also encourage them to pass bills that expand abortion rights and care, such as the federal Women’s Health Protection Act (WHPA), Equal Access to Abortion Coverage in Health Insurance (EACH Woman) Act of 2019 and Abortion is Health Care Everywhere Act.

Lastly, we can also support abortion funds like the Women’s Medical Fund of Wisconsin. It was co-founded by FFRF’s principal founder, Anne Nicol Gaylor, who oversaw this fund as a volunteer from the late 1970s until her death in 2015. The fund annually helps an average of 900-1,000 Wisconsin residents without means exercise their constitutional rights under Roe v. Wade. Donations are deductible for income-tax purposes.

We need to do all that we can to fight back.

BARBARA ALVAREZ is a contributing writer for the Freedom From Religion Foundation. Previously she had held the role as FFRF's inaugural Anne Nicol Gaylor Reproductive Rights Intern, a program set up to memorialize FFRF’s principal founder, who was an early abortion rights activist and author of the book Abortion is a Blessing. Barbara was a major winner in FFRF’s essay competition for graduate students, writing about the bible’s role in the abortion battle.
All Articles by this author
PrevPreviousOur annual meeting, an uncertain transition, the Scopes trial & Vatican abuse
Next‘War on Christmas’ is in full swing, and this year it’s no jokeNext