It’s hard to think of a person we love here more than Charles Darwin (with a life-size likeness of him at our office to prove it!). So, on his Feb. 12 birthday, we asked you all to support congressional resolutions designating that day as Darwin Day to promote the scientific way of thinking.

Affectionate interview with Ed Asner
We also have a lot of affection for acting legend Ed “Lou Grant” Asner, especially after the nonagenarian recently visited us at Freethought Hall in Madison, Wis. He sat for an extended television chat with FFRF Co-Presidents Dan Barker and Annie Laurie Gaylor, and we’re broadcasting the interview on Sunday. “It’s all so blatantly plain: How people can follow a God and turn it into a false idol,” says Asner during the fun interview. Tune in to find out whether Asner preferred portraying God or Santa. Check out here where you can see the show on Sunday. Or you can always catch it on our YouTube channel. 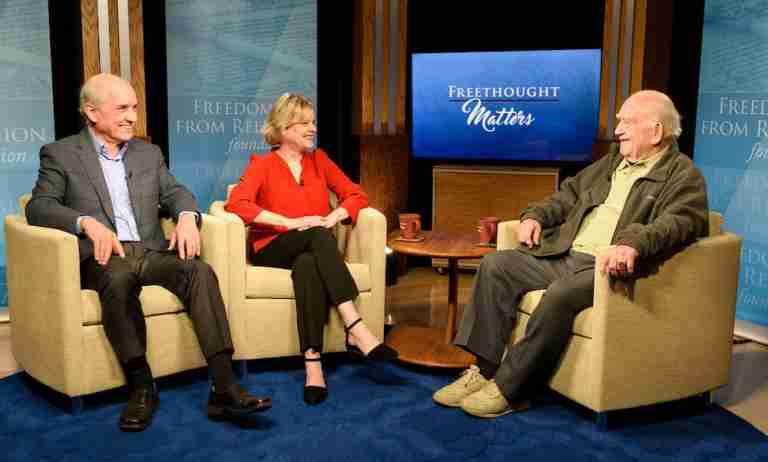 Receiving love from the legal system
The legal system showed us a whole lot of love this week. A federal judge ordered the state of Kentucky to pay more than $150,000 to the groups (us and ACLU-Kentucky) representing the freethinker denied an “IM GOD” license plate. 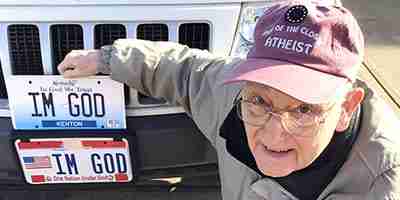 “Groups such as ours have to put in a lot of work to ensure the constitutional rights of ordinary folks,” said Annie Laurie. “We truly appreciate that the court recognizes this.”

And in a capstone to our 11 Circuit Court victory last year, the Brevard County (Fla.) Board of Commissioners agreed not to discriminate against people who don’t belong to mainstream religions. “Official invocation policies shouldn’t be favoring certain religious beliefs, no matter how dominant they are,” said Annie Laurie. 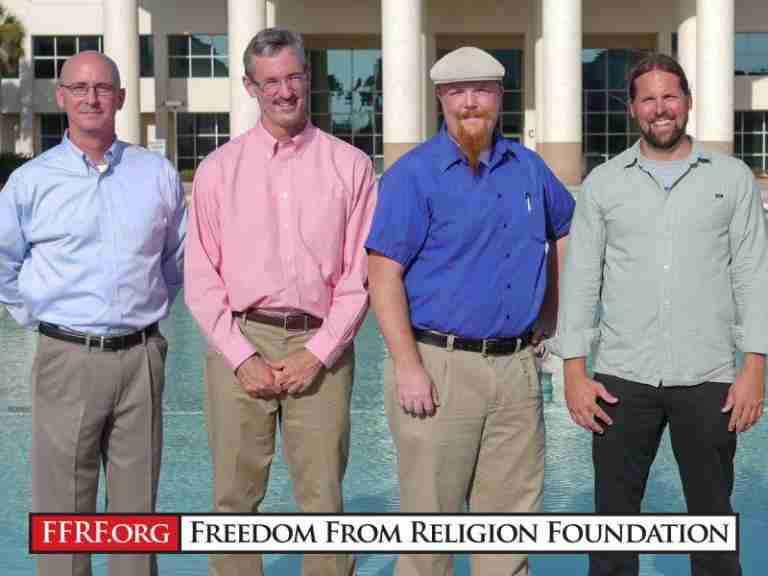 On our “Ask an Atheist” Facebook Live feature this week, FFRF Legal Director Rebecca Markert and Senior Counsel Patrick Elliott discussed our two court victories and talked with David Williamson, the lead plaintiff in the Brevard case (and head of our Florida chapter).

Advancing the secular cause on Capitol Hill
We here at Freethought Hall in Madison, Wis., have a lot of love and admiration for the work that FFRF’s Director of Governmental Affairs Mark Dann is doing in the nation’s capital to advance the cause of freethought. Dan and Annie Laurie talked with Mark on our radio show this week to find out about Mark’s invaluable strivings in D.C. 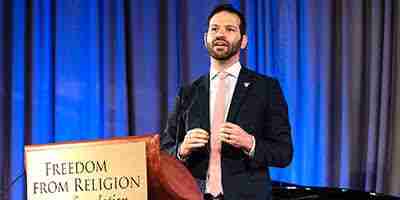 R-E-S-P-E-C-T
A Nevada school district showed us, well, if not love, then at least respect.

The Colorado Statehouse also showed us some appreciation by hearing our testimony on seven virulently anti-LGBTQ bills. FFRF Staff Attorney Ryan Jayne was thwarted by the weather in his attempt to submit his testimony in person, but Claudette StPierre, the head of our Denver chapter, ably filled in for him. “The bills before you today . . . are motivated purely by religious ideology,” Ryan stated in his testimony. 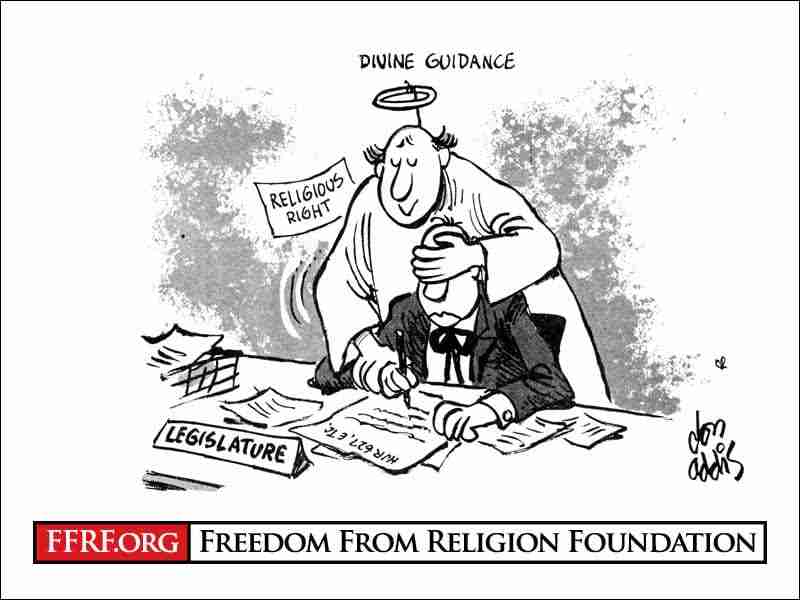 Not a whole lot of love from the Trump administration
The secular community has been receiving little love or respect from the Trump administration. Annie Laurie and FFRF Director of Strategic Response Andrew Seidel dissected two of President Trump’s recent events: the National Prayer Breakfast and the State of the Union, respectively. “The 68th National Prayer Breakfast should be the last,” Annie Laurie proclaimed.

In his State of the Union speech, Trump claimed to be defending religious liberty; instead, he weaponized it, Andrew pointed out.

What a Trumpian hook!
We learned this week of a particularly bizarre initiative the Trump administration is funding, even by its far-out standards: It’s bestowing half a million dollars on a theocratic group called (we aren’t making this up!) Hookers for Jesus. “It’s unconscionable that the U.S. government is providing taxpayer money to an organization that uses public funds to preach and convert vulnerable women,” says Annie Laurie. FFRF Andrew also concisely explains the whole weird affair on our “Newsbite” segment. 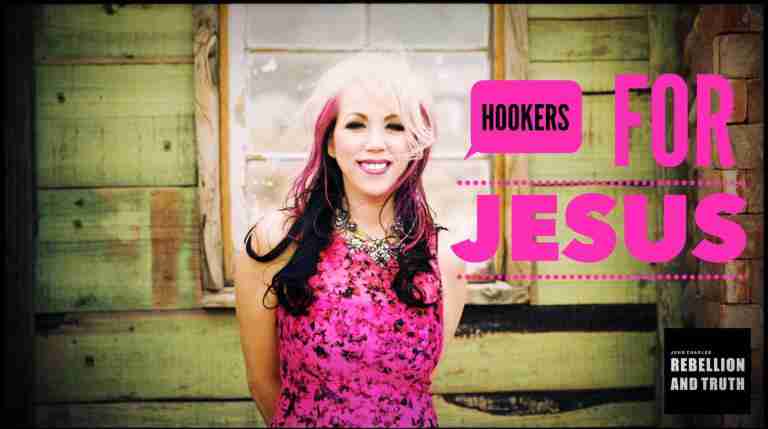 Show some constitutional love, Virginia and Tallahassee
After a particularly fractious recent prayer session at the Virginia House of Delegates, we urged the body to send some love toward the U.S. Constitution by discontinuing prayers altogether. 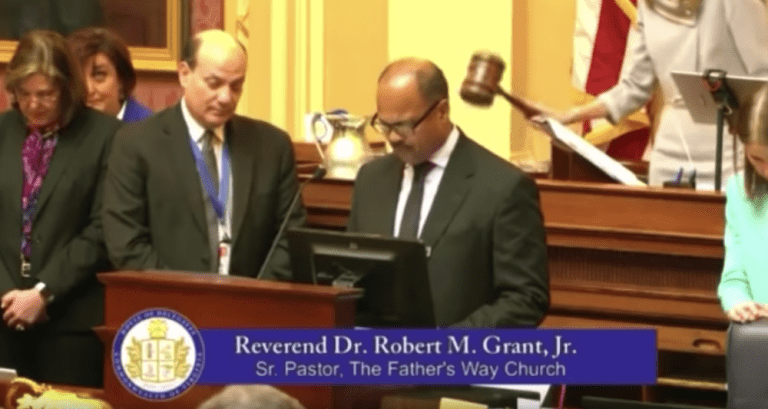 And, following an appallingly religious swearing-in of the Tallahassee police chief, we asked him to display some constitutional loving.

Regardless of who shows us love, we know on Valentine’s Day that we wouldn’t be able to do anything without YOUR love and affection.

All Articles by this author
PrevPreviousThe 68th National Prayer Breakfast should be the last
NextArt contests, authors, pioneering freethinkers and constitutional victoriesNext