Skip to content
PrevPreviousFFRF salutes Black history and secularism
NextCollege basketball, pro-natalists, folk songs and the Church — what a lineupNext 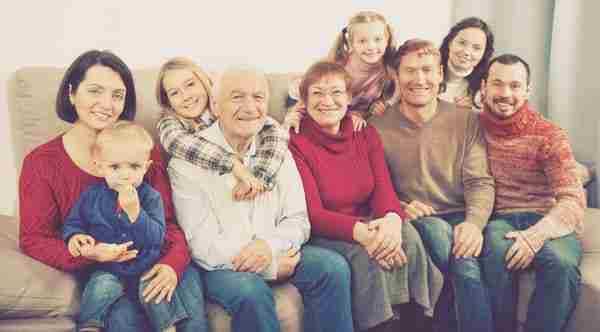 As someone who grew up in the 1960s and ’70s, I well remember the columns and columns of newsprint that used to be devoted to extolling huge families and women breeders in periodicals of the era. “Mother of the Year” awards in countless religious (mostly Roman Catholic) and even civic groups would invariably go to the dutiful housewife with the most children; 12 and 14 kids were not unusual. Photographs featuring these enormous broods would be published alongside ecstatic captions and copy.

When I was in high school in Wisconsin, the notorious state Sen. Gordon Roseleip, one of Wisconsin’s many archconservative legislators, openly opposed legislation to repeal Wisconsin’s archaic “indecent article” law banning contraception for unmarrieds. Wisconsin was the last state in the union with such a law on the books, and when it was finally overturned in 1974, it was thanks to the courts, not our benighted Legislature. Roseleip offered this rationale:

“Now you want to give contraceptives to poor people. Where are we going to get men for the armed forces . . . It’s a good way to destroy an army.”

I got some enjoyment caricaturing him at the time: 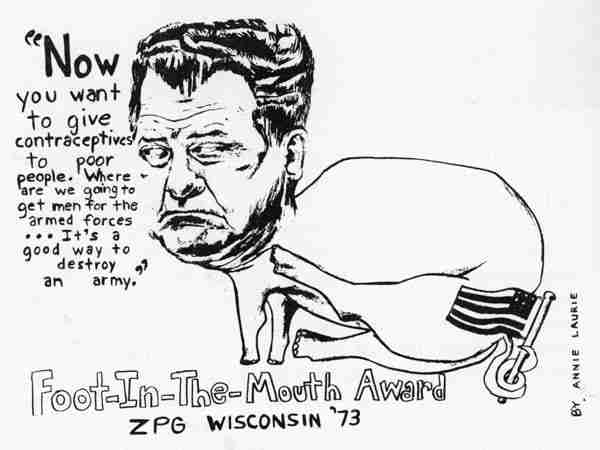 Fortunately, the Pill and the women’s movement — and the fact that Roman Catholics today use contraception with nearly the same frequency as non-Catholics — have largely done away with such overtly pro-natalist propaganda in this country. But pro-natalist attitudes, which are innately anti-feminist, persist in the United States (and elsewhere), as demonstrated by the constant attacks on abortion rights and now, contraception.

During his candidacy, President Trump infamously stated that women should be punished for having abortions. After criticism, he backpedaled, saying it’s the doctors who perform abortions who should be punished. Of course, prior to Roe v. Wade and the state-by-state abortion law reform preceding the 1973 Supreme Court decision, both women and doctors were routinely subject to criminal sanctions over abortion. Wisconsin is one of about nine states whose legislatures have refused to repeal criminal abortion statutes, meaning that if the high court were to turn the abortion question over to the states, those draconian bans would become law. Wisconsin’s unrepealed criminal law on abortion dictates that anyone who provides an abortion is guilty of a felony, and the penalty is a fine not to exceed $10,000 or imprisonment not to exceed six years, or both. While the Legislature begrudgingly repealed criminal sanctions against women having abortions in 1985, it is unconscionable that it refuses to repeal the sanctions against doctors. Physicians who provide abortion care in the United States, where they are under constant assault, are heroes, not criminals.

Even today, with Roe still the law of the land, we see hospitals and insurance companies callously turning away women in later pregnancy who are carrying fetuses that are doomed or dying, but not yet dead. Last week, the Women’s Medical Fund helped such a woman, carrying a wanted pregnancy, in which the fetus, incompatible with life, could not survive to delivery. Dying or dead fetuses can endanger, even kill women, if they are not removed, not to mention the emotional anguish. Who can forget the horrible, completely avoidable death of Savita Halappanavar, a Hindu dentist living in Ireland who died torturously of blood poisoning in 2013 after the hospital refused an abortion when she began miscarrying. The Irish people have since, by referenda, laudably overturned the abortion ban. Meanwhile, however, an increasing number of U.S. states are adopting more and more restrictions on abortion, intent on overturning Roe in the Kavanaugh Supreme Court.

“Kinder, kuche, kirche” (“children, kitchen, church”) is a phrase about “women’s place” used by the Nazis. One of Hitler’s first official acts, as Gloria Steinem has reminded us, was to make abortion illegal in Germany. The Nazis offered cash payments when women stopped working and got married, along with other incentives for bearing more children — more cannon fodder as the Nazis put their genocidal killing machine to work.

Hand-in-hand with pro-natalist policies, of course, is the scapegoating of immigrants, as we see with the anti-abortion/anti-contraception Trump administration’s obsession with walling off the Mexican border. A similar dynamic seems to be at play in Eastern Europe. Last week, Viktor Orban, Hungary’s anti-immigrant, nationalist prime minister, announced that any Hungarian woman with four or more children will no longer pay income tax:

“We are living in times when fewer and fewer children are being born throughout Europe. People in the West are responding to this with immigration. Hungarians see this in a different light. We do not need numbers, but Hungarian children.”

Not all countries currently offering birth incentives are authoritarian or anti-immigrant. But the pro-natalist trend here and abroad, signaling a “Handmaid’s Tale”-esque nationalization of women’s uteruses, is grave cause for concern, for women and our rights, and for our troubled and overpopulated world increasingly dominated by religiously nationalist strongmen.

Annie Laurie Gaylor is co-president of the Freedom From Religion Foundation. She co-founded FFRF in 1976 as a college student with her mother Anne Nicol Gaylor. She served as the editor of FFRF’s newspaper, Freethought Today, from 1985-2009. She became FFRF co-president with Dan Barker in 2004. Annie Laurie has authored three books for FFRF: Woe to Women: The Bible Tells Me So; Woe to Women: The Bible Tells Me So; and Women Without Superstition: “No Gods – No Masters”, the first anthology of women freethinkers.
All Articles by this author
PrevPreviousFFRF salutes Black history and secularism
NextCollege basketball, pro-natalists, folk songs and the Church — what a lineupNext