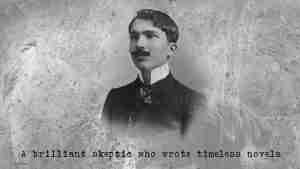 We’re observing during this month the 65th death anniversary of a Greek literary giant — someone who created a global stir due to his irreverence long after he had died.

In 1988, fundamentalist Christians in several nations vented rage and violence because a movie, “The Last Temptation of Christ,” portrayed Jesus as a wavering human, lusting for the prostitute Mary Magdalene. A Parisian theater showing the film was firebombed, sending 13 people to hospitals. Another at Besancon, France, suffered a similar attack. Tear gas was let loose in some French movie houses. Israel’s and India’s governments banned the film.

In the United States, theaters were ransacked, one was burned, another had its screen slashed, and a screaming protester crashed a bus into a theater lobby. About 25,000 evangelicals picketed Universal Studios in Hollywood, and smaller throngs protested in several cities. Catholic bishops and TV evangelists angrily denounced the movie. Some filed lawsuits and appealed to politicians in attempts to ban it. Campus Crusade for Christ leader Bill Bright offered $10 million to buy the movie and burn it. Most theaters in the South, fearing savage reprisals, refused to show the film.

All this tumult provided an epitaph for a brilliant, brooding, funny, sad, profound, Greek writer who had even then died more than three decades earlier (on Oct. 26, 1957). The movie was drawn from his most controversial novel.

Philosopher-author Nikos Kazantzakis left an indelible mark on the modern world. Born in Crete in 1885 (some references say 1883), he attended a Catholic school, then studied law in Athens, and then philosophy in Paris under Henri Bergson, the eventual Nobel laureate who focused on the “vital force” of the human spirit. Fascinated by spiritual questions, Kazantzakis published his first book and play in 1906 while still a student. During subsequent years, he traveled through Europe and Asia, writing dramas, epic verse and travel books.

In 1919, Kazantzakis was appointed welfare minister of Greece. By the time he resigned in 1927, he had fed and rescued 150,000 Greek residents trapped by a civil war in the Caucasus.

Sympathetic to Marxism, he was a war correspondent during the Spanish Civil War in the 1930s and eventually was awarded the Lenin Peace Prize — but trips to the Soviet Union disillusioned him, and he never joined the Communist Party. Before World War II, he lived on the Greek island of Aegina. After the war, he married late in life, became a Greek government minister again, then worked for UNESCO. Finally, he and his wife settled in Antibes, France.

Kazantzakis’ novels brought him his greatest fame and impact. Zorba the Greek portrayed a bookish young intellectual operating a lignite mine on a Greek island — while learning about life from Zorba, his lusty, crafty, uneducated, smart, exuberant foreman. Zorba danced wildly, laughed at social and religious lunacy, and personified Bergson’s “vital force.”

Like most agnostic philosophers, Zorba and his young employer tried in vain to discern a meaning in life. The unlettered workman begged his educated companion for answers — then scorned his scholarly learning when he could provide none. Here’s a sample from the novel:

“Zorba looked at the sky with open mouth in a sort of ecstasy, as though he were seeing it for the first time….
“‘Can you tell me, boss,’ he said, and his voice sounded deep and earnest in the warm night, ‘what all these things mean? Who made them all? And why? And, above all’” — here Zorba’s voice trembled with anger and fear — ‘why do people die?’”
“‘I don’t know, Zorba,’ I replied, ashamed, as if I had been asked the simplest thing, the most essential thing, and was unable to explain it.’
“‘You don’t know!’” said Zorba in round-eyed astonishment, just like his expression the night I had confessed that I could not dance. … “‘Well, all those damned books you read — what good are they? Why do you read them? If they don’t tell you that, what do they tell you?’”

Burly Zorba and his egghead “boss” observed absurd religious superstitions of the villagers surrounding them. They laughed at the pretense of priests and the gullibility of believers. Zorba scoffed: “God makes them deaf or blind, and they say: ‘God be praised.’” Yet they returned, again and again, to the enigma that haunted them:
“When a man dies, can he come to life again?” he asked abruptly.
“I don’t think so, Zorba.”
“Neither do I.”

Zorba shrewdly perceived that his intellectual friend had little interest in succeeding as a lignite miner — that his real dream was to create a haven for thinkers and scholars. When their mine failed, and they finally parted, the owner reassured him: “Don’t fret, Zorba, we shall meet again, and, who knows, man’s strength is tremendous! One day we’ll put our great plan into effect: We’ll build a monastery of our own, without a god, without a devil, but with free men; and you shall be the gatekeeper, Zorba.”

Zorba the Greek was published in 1946, gaining great popularity, and became a successful movie two decades later with Anthony Quinn as the cunning hero. Neither the novel nor the film caused noticeable controversy.

However, a later Kazantzakis novel, The Last Temptation of Christ, published in 1955, created quite a ruckus. Multitudes of Christians were outraged by its portrayal of Jesus as uncertain and self-doubting, distracted by his yearning for Mary Magdalene. The Vatican banned the book and the Greek Orthodox Church excommunicated Kazantzakis, a nominal member. Movie producers avoided the novel — until 1988, when it finally was directed by Catholic-born Martin Scorsese, who cast no Jews in the film to avert bigoted hostility. Even with that precaution, it nonetheless provoked rage.

Kazantzakis received the International Peace Award in Vienna in 1956. He was nominated repeatedly for the Nobel Prize in Literature, and in 1957 he lost by a single vote to Albert Camus. Later that year, he died of leukemia in Germany.

Of dramas Kazantzakis wrote in France, a critic said: “At the center of these plays stands the same figure, a solitary anti-hero, understanding (as the rest of the world does not) that the struggle at the heart of the play’s action justifies itself but is inevitably fruitless.”

And unable to find ultimate meaning in life, the narrator of Zorba contents himself with small treasures: “How simple and frugal a thing is happiness: a glass of wine, a roast chestnut, a wretched little brazier, the sound of the sea.”

Kazantzakis understood the perplexity of humankind, who can give no answer to the final riddle.

James A. Haught, syndicated by PeaceVoice, was the longtime editor at the Charleston Gazette and has been the editor emeritus since 2015. He has won two dozen national newswriting awards and is author of 12 books and 150 magazine essays. He also is a senior editor of Free Inquiry magazine and was writer-in-residence for the United Coalition of Reason.
All Articles by this author
PrevPreviousMeet me in Texas to discuss defending reproductive rights
Next‘That was the week that was’Next