Skip to content
PrevPreviousThe Christian Right must be incapable of shame.
NextTrump panders at CPAC . . . againNext

Lesson of Florida’s hypocritical vote: Put ‘God’ back in that closet, fast! 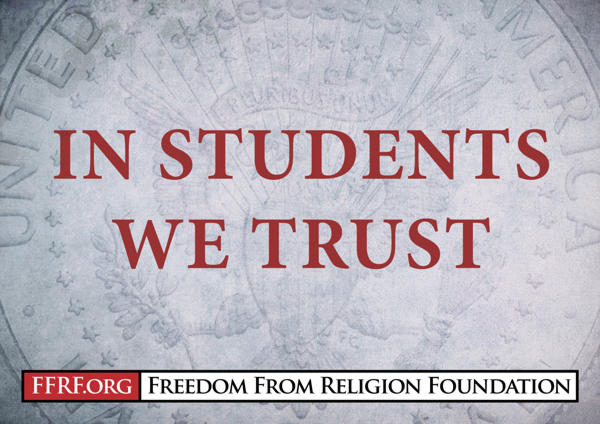 Our students have so much to teach our lawmakers.

After attending an early morning funeral for one of 14 classmates massacred at their school on Feb. 14, about 100 grieving but resolute high school students from Parkland, Fla., bused up to Tallahassee to ask legislators for a ban on the type of assault weapon turned on them last week.

After that four-hour bus trip, they watched in shock from the gallery, some crying, as the House, by a 71-37 vote, cavalierly refused to even take up a bill to ban assault weapons. If that wasn’t indignity enough, an aide to a Florida House member promptly claimed two Parkland students were “actors” (and later got fired for spreading this vicious rumor).

And even worse was to follow. The House voted by a 97-10 margin the following day to pass HB 839, a bill requiring public schools to conspicuously exhibit the motto, “In God We Trust,” as well as its display in buildings where school boards meet. FFRF has been following this bill and had contacted our hundreds of Florida members three times since the bill’s introduction to lobby against it. It must still pass the Florida Senate to become law.

The House erupted in applause and self-congratulation after this despicable vote, according to The Washington Post. Florida state Rep. Kimberly Daniels, who not coincidentally runs a ministry, told the Tampa Bay Times in an apparent reference to God: “He is not a Republican or a Democrat. He is not black or white. He is the light, and our schools need light in them like never before.” During the debate, she warned, “We cannot put God in a closet when the issues we face are bigger than us.”

That gets to the heart of what’s wrong with that damn motto, aside from its legal problems. Sniveling public officials like Daniels use “God” and prayer as an excuse not only to impose their religion on the rest of us, but also to avoid taking necessary action to solve our earthly problems. Such theocrats even pat themselves on the back, as if an admission of being ineffectual and powerlessness were laudable. If the issues Daniels, the state of Florida and our nation face are just “too big” for her, if she can’t stand the heat, what’s she doing in the Florida state Capitol anyway?

When our nation proclaims “In God We Trust,” it signals that we don’t trust in ourselves, we don’t even have to try to solve problems that are eminently solvable, because “Thy will be done.” Prayer and “turning to God” are the ultimate political cop-out.

Absurdly, Daniels said she had a vision earlier in the week: “I believe it was God, and I heard a voice say, ‘Do not politicize what has happened in Florida and do not make this a thing of division.’”

But that is precisely what Daniels and the other legislators have done. Instead of addressing the root cause of the seventh gun massacre this year in our public schools, they chose to politicize the horrific violence, and to divide citizens on the basis of religion. Fully one-fifth of Generation Z (those born after 1999) identify not just as having no religion, but as atheists and agnostics. That’s a huge shift in our national demographics. With the “Nones” (nonreligious) outnumbering Catholics in this country, and the rising seculars in Generation Z, that’s an awful lot of people for a national motto to exclude.

It is clear that the student activists from Marjory Stoneman Douglas High School are not going to “trust God” to solve the problem of gun violence in our schools and our nation. They are determined to persevere — mobilizing for their lives and in memory of their fallen classmates and teachers.

My new motto? In these students I trust. And I have a word for the Rev. Daniels, as well. Kim, if your belief in a god gets in the way of caring about the students at Marjory Stoneman Douglas High School, you need to put your “God” back in a closet, just like Matthew 6:5-6 instructs. Instead follow the leadership of these admirable students.

Annie Laurie Gaylor is co-president of the Freedom From Religion Foundation. She co-founded FFRF in 1976 as a college student with her mother Anne Nicol Gaylor. She served as the editor of FFRF’s newspaper, Freethought Today, from 1985-2009. She became FFRF co-president with Dan Barker in 2004. Annie Laurie has authored three books for FFRF: Woe to Women: The Bible Tells Me So; Woe to Women: The Bible Tells Me So; and Women Without Superstition: “No Gods – No Masters”, the first anthology of women freethinkers.
All Articles by this author
PrevPreviousThe Christian Right must be incapable of shame.
NextTrump panders at CPAC . . . againNext