Skip to content
PrevPreviousWe’ve been feeling extra special
NextThe Christian Right must be incapable of shame.Next

No More # thoughts and prayers

It’s time for a secular “hallelujah!” In the wake of the Florida school massacre, there seems to be a national uprising against the political platitude #thoughtsandprayers offered after every mass shooting. Journalists, families of victims and survivors are increasingly calling out self-righteous public officials who wrap themselves in piety as if it’s an excuse for taking no action. As New York Times columnist Timothy Egan puts it: “Stuff the thoughts, hold the prayers, and do something.”

Seventeen lives were senselessly snuffed out by the young assault-weapon-wielding misfit at the Parkland, Fla., high school, including 14 students. Photographs of their bright, hopeful and far-too-young faces are haunting. This is the seventh school shooting so far this year (excluding incidents such as suicides by gun taking place at schools). Anguish and sorrow may be our numbed first national reaction. But a growing chorus of Americans of no religion and various religions are also expressing disgust over the do-nothing “thoughts and prayers” response by the very public officials in the best position to enact real reform and spare future lives from senseless gun violence.

Students are in the forefront of calling out the hypocrisy. Time magazine reports: “Adults offered ‘thoughts and prayers’ after the Florida school shooting. But students who survived want action.”

Vogue ran a reaction story headlined: “The students who survived the Parkland, Florida, shooting aren’t interested in ‘thoughts and prayers.’”

One of those rebelling against the ubiquitous #thoughtsandprayers is Fern Malila of Michigan, a constituent of U.S. Rep. Jack Bergman. She had a brilliant rejoinder to this whole nonsense.  She wrote her member of Congress: “Dear Rep. Bergman, since you and your colleagues in Congress seem to feel that this is the solution to mass murder, please accept this contribution.” She posted a photo of the “check” with her campaign contribution on her Facebook page with the amount filled in: “Thoughts and Prayers.” 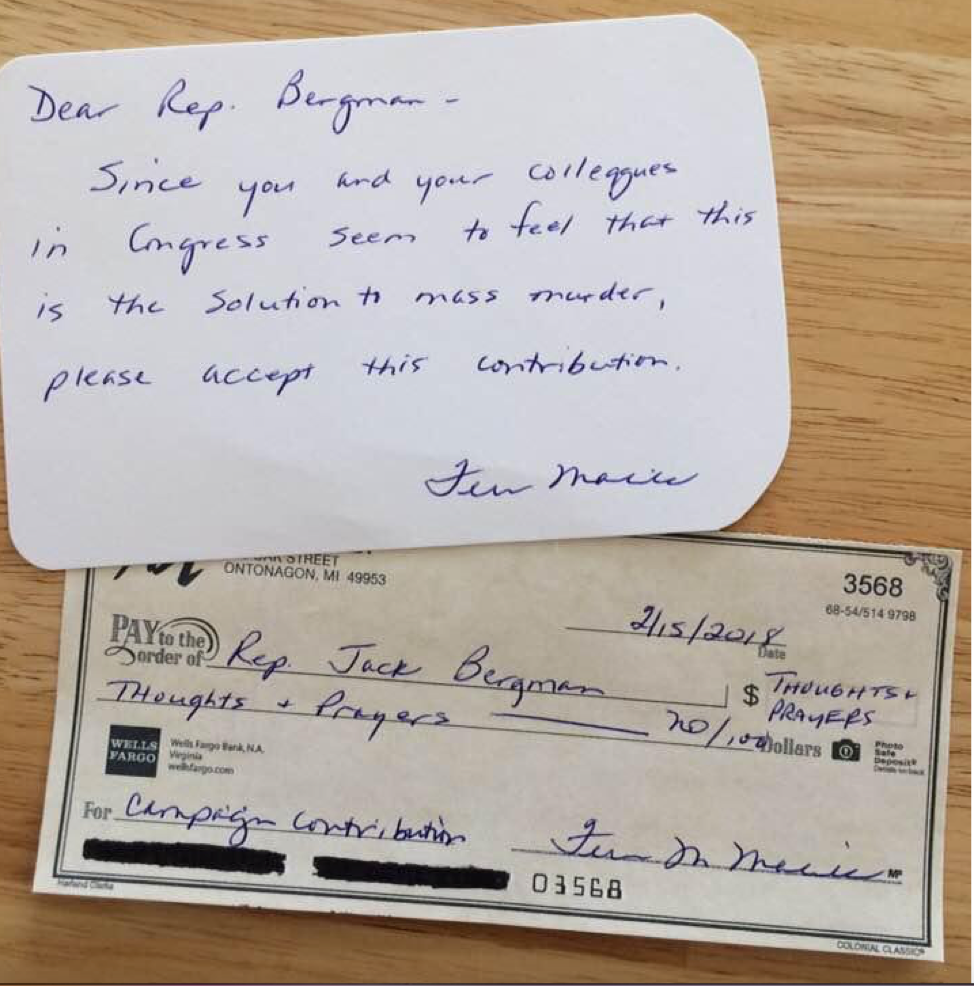 Others are following suit. I hope this tactic goes viral. 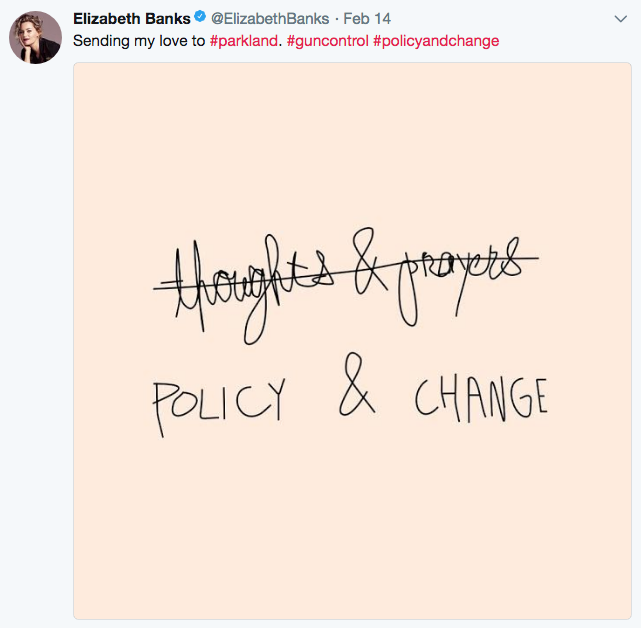 Another famous nonreligious American, Stephen King, had this to say:

I don’t know Kim Kardashian’s views on religion overall, but she gets that “nothing fails like prayer” on the gun violence crisis:

The Guardian reports other subversive reactions: “Bess Kalb, a writer for the late-night television show ‘Jimmy Kimmel Live!’ responded to lawmakers offering prayers by tweeting the amount of contributions they received from the National Rifle Association (NRA).” The Guardian reports that the nonpartisan Center for Responsive Politics estimates the NRA and its affiliates spent a record $54 million during the 2016 elections to secure Republican control of the White House and Congress, including at least $30.3 million to help elect Donald Trump.

And another’s (since removed from social media; youthful crudities excusable under the circumstances):

One of the most despicable responses to the school shooting came from House Speaker Paul Ryan, who has received nearly $50,000 in direct NRA campaign contributions, but far more in indirect boosts. He told a local radio show:

“I think we need to pray, and our hearts go out to these victims. And I think, as public-policy makers, we don’t just knee jerk before we even have all the facts and the data.” New York Times columnist Egan called this “platitudinous mush.”

The New York Times put up an amazing chart, “Thoughts and prayers and NRA funding” following the Las Vegas shooting last fall, contrasting politicians’ “thoughts and prayer” statements side by side with NRA expenditures on their behalf. The gun group has spent more than $3 million each on Rubio and Portman. Take a look.

And the evangelists for whom these politicians are in part shilling for are, of course, just as bad. Having ceded all moral high ground in their embrace of a morally tainted president, they too put their political agenda above rational gun control policy and the lives and security of students everywhere. Look at this tweet by the noxious National Day of Prayer Taskforce (which has hijacked the already unconstitutional National Day of Prayer and turned it into a Christian Right theocratic spectacle): 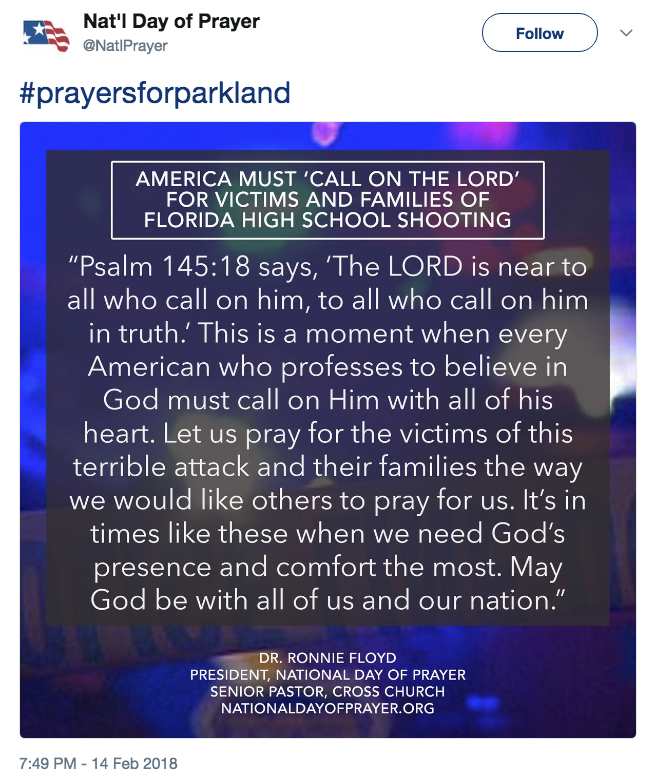 The “Lord” has been noticeably AWOL when it comes to school shootings.

Leading Christian Right figures have been even worse. Evangelist Franklin Graham retweeted Trump’s vacuous remark and added his own: 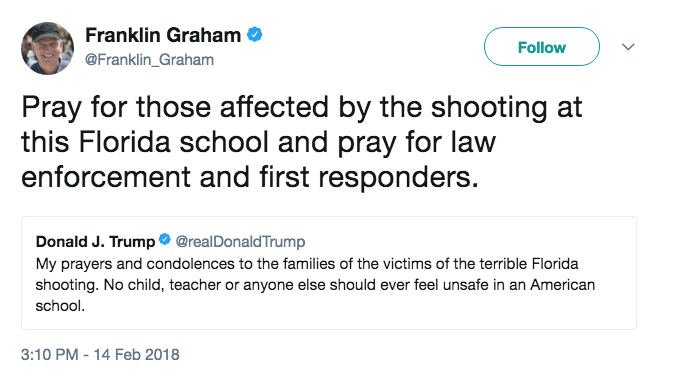 With jaw-dropping hypocrisy, Graham then had the audacity to put up an anti-abortion message with a breathtaking devaluation of real children’s lives: 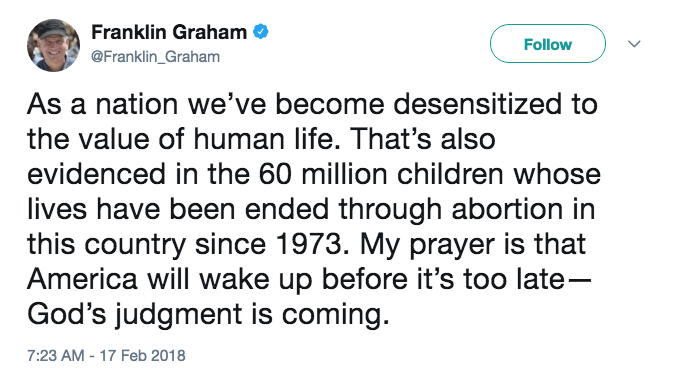 No, Franklin, rational judgment is coming, and it will put you squarely in the camp of the political and pious dinosaurs who soon may be dethroned.

It’s tragic that it has taken persistent inaction over recurrent mass shootings to wake up the nation to the emptiness of political prayer platitudes. But it’s heartening to finally see many Americans demand action over prayer — and reality-based social policy over faith-based platitudes.

Annie Laurie Gaylor is co-president of the Freedom From Religion Foundation. She co-founded FFRF in 1976 as a college student with her mother Anne Nicol Gaylor. She served as the editor of FFRF’s newspaper, Freethought Today, from 1985-2009. She became FFRF co-president with Dan Barker in 2004. Annie Laurie has authored three books for FFRF: Woe to Women: The Bible Tells Me So; Woe to Women: The Bible Tells Me So; and Women Without Superstition: “No Gods – No Masters”, the first anthology of women freethinkers.
All Articles by this author
PrevPreviousWe’ve been feeling extra special
NextThe Christian Right must be incapable of shame.Next