Trump Interference With 17-Year-Old’s Abortion Shows It Can Happen Here, and Is Happening Here

Sinclair Lewis, in the face of the rise of European fascism, wrote a cautionary tale, “It Can’t Happen Here,” published in 1935, which The New York Times 82 years later dubbed “the classic novel that predicted Trump.” 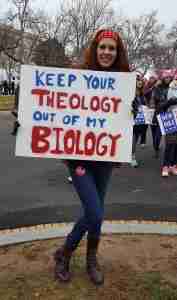 It is happening here already. Witness what befell one young 17-year-old woman on American soil.

Our government seized this undocumented minor immigrant, unwillingly pregnant, and did its damnedest to deny her a lawful abortion. Not only did the Trump administration delay her requested abortion by more than a month (perilously close to the Texas cut-off for abortion), it forced her, sickeningly, to be subjected to anti-abortion proselytizing at a “fake news” Christian pregnancy center to pressure her to change her mind.

This young woman, who knows her mind and aspires to become a nurse, immediately and successfully sought a bypass from Texas state court, allowing her as an unaccompanied minor to schedule the abortion. But she was in the clutches of the right-wing zealots who’ve seized control of our government and have turned the DOJ into the Department of Injustice and HHS into Health and Inhuman Services. A new Trump rule requires undocumented minors to seek personal permission for an abortion from Scott Lloyd, director of the Office of Refugee Resettlement. And since his position is to “promote child birth and fetal life,” he and the government refused to spring “Jane” from her detention center so she could have an abortion.

The American Civil Liberties Union represented “Jane Doe” and appealed the federal government’s refusal to release her. After U.S. District Judge Tanya Chutkan ordered the government to allow “Jane” to leave for the procedure, the Trump administration appealed to the D.C. Circuit Court of Appeals in its quest to deny its young and helpless prisoner her requested abortion. A three-judge panel carelessly ruled that the Health and Human Services Department had until Oct. 31 to “find a sponsor” to take custody of the girl so she could be released and have an abortion without governmental involvement.

Fortunately, at the ACLU’s request, the entire panel on the circuit agreed to hear the case, ruling a week ago Tuesday in “Jane Doe’s” favor. Thanks to the heroic efforts of the ACLU, “Jane,” now 15 weeks into her pregnancy, got her abortion.

“Today’s decision rights a grave constitutional wrong by the government,” Judge Patricia Millett wrote in her eloquent concurring opinion. “Remember, we are talking about a child here. A child who is alone in a foreign land. A child who, after her arrival here in a search for safety and after the government took her into custody, learned that she is pregnant. Surely, the mere act of entry into the United States without documentation does not mean that an immigrant’s body is no longer her or his own. Nor can the sanction for unlawful entry be forcing a child to have a baby.”

Although the panel ruled 6-3 in favor of the young woman’s right to self-autonomy, the dissent is shocking. One of the dissenting justices, Karen LeCraft Henderson, wrote that the undocumented teenager had no constitutional right to an elective abortion. “To conclude otherwise rewards lawlessness and erases the fundamental difference between citizenship and illegal presence in our country,” she wrote.

In fact, isn’t this exactly why our nation was founded — for refugees such as this 17-year-old seeking freedom from tyranny, particularly religious tyranny?

In a nation supposedly established on freedom and liberty of conscience, it would be utterly appropriate for women refugees who are unwillingly pregnant to travel to the United States for lawful abortion care. In fact, this is what many desperate American women, at least those with means, were forced to do in reverse in the bad old days when abortion was criminalized in the United States. Women routinely flew to Sweden or Japan or London to terminate unwanted pregnancies. They included Sherri Finbine Chessen, the wholesome star of the children’s program “Romper Room” and mother of four, whose plight — when she realized in 1962 that prescribed thalidomide had caused profound fetal deformity — woke up our nation to the need to repeal criminal abortion laws.

As “Jane” told the media: “No one should be shamed for making the right decision for themselves. I would not tell any other girl in my situation what they should do. That decision is hers — and hers alone. My lawyers have told me that people around the country have been calling and writing to show support for me. I am touched by this show of love from people I may never know and from a country I am just beginning to know. To all of you, thank you.”

She added, “This is my life, my decision. I want a better future. I want justice.”

Noting that hundreds of pregnant undocumented immigrants have landed in federal custody in recent years, the ACLU stated: “Justice prevailed today for Jane Doe. But make no mistake about it, the administration’s efforts to interfere in women’s decisions won’t stop with Jane.”

Trump was not ruthless enough to please his extremist Christian cohorts, however. Texas Attorney General Ken Paxton lined up other Republican state attorneys general to file a legal brief asking the Supreme Court to halt the abortion. (Kudos to New York Attorney General Eric Schneiderman and 13 other Democratic attorneys general who filed a brief in support of the young woman’s rights and “every other Jane Doe fighting for the fundamental right to make her own health care decisions.”)

The assaults against women’s rights in our nation continue at a dizzying pace. Earlier this month, President Trump virtually repealed one of the great achievements of the Obama administration: the contraceptive mandate. With two strokes of a pen, Trump signed twin executive orders allowing any employee with religious or “moral” objections to contraception to deny coverage to women workers. This outrage will end up harming hundreds of thousands of women, and undoubtedly result in untold unwanted pregnancies.

Now a document released by crooked.com, reportedly leaking an internal White House memo, warns of evermore assaults against women’s rights in the form of domestic and international abstinence programs and the defunding of  Planned Parenthood and other programs successfully fighting teen pregnancy, among other proposals. Even Head Start is on the chopping block.

If the Religious Right’s puppet Donald Trump has his way, the right to choose will be right back to the appalling old days, pre-Roe v. Wade, when women with an unwanted pregnancy had the choice of self-abortion, back-alley abortion or mandatory motherhood.

Annie Laurie Gaylor is co-president of the Freedom From Religion Foundation. She co-founded FFRF in 1976 as a college student with her mother Anne Nicol Gaylor. She served as the editor of FFRF’s newspaper, Freethought Today, from 1985-2009. She became FFRF co-president with Dan Barker in 2004. Annie Laurie has authored three books for FFRF: Woe to Women: The Bible Tells Me So; Woe to Women: The Bible Tells Me So; and Women Without Superstition: “No Gods – No Masters”, the first anthology of women freethinkers.
All Articles by this author
PrevPreviousWe’re making things more exciting
NextIt’s hard for us to believe how much we get doneNext