Nothing to cheer about in Texas cheerleader case 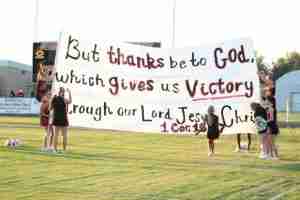 A Texas appellate court recently issued yet another ruling in a long-running case that should have ended just days after it was filed.

This is the fourth court opinion issued in five years regarding this particular case. The legal issue concerns whether religious messages on cheerleaders’ banners in the Kountze Independent School District are government speech or school-sponsored speech. If they are, the cheerleaders would not have a free speech right under Texas law to display the messages. The messages certainly are government speech, since the banners are held up on the football field by students in school uniforms chosen to represent the school. The Texas appellate court found otherwise.

While the decision is plainly wrong, the overall case is still worth reviewing because it highlights the shameful work of the theocratic First Liberty Institute. The institute appears to be doing two things: (1) Continuing to pursue the case merely to obtain an increasing amount of attorney fees and, more importantly, to fundraise off the case; and (2) colluding with the school district to get a favorable court decision on issues not before the court.

It appears that the attorneys are more intent on securing their fees than protecting the rights of students.

The lawsuit has been ongoing for more than five years. Last year, the Texas Supreme Court ruled that the case was not moot and remanded for further proceedings. While the most recent decision by the appellate court gives another jurisdictional win to the cheerleaders, it does not conclude the lawsuit. The case could drag on as the school system and the former cheerleaders head back to the trial court.

Collusion to the hilt

FFRF first raised concern about the banners in 2012. It asked the school district to take action to address them, since they violated the Establishment Clause. After the cheerleaders brought suit, FFRF filed a friend of the court brief with the district court. However, given the angry community reaction to anyone who opposed the banners, FFRF did not have a plaintiff who was willing to challenge them in court. That left a Christian-friendly school district and a group of Christian cheerleaders represented by a theocratic Texas law firm to litigate the case as a supposed free speech issue.

What is often not mentioned by the media covering the case is that the school district has allowed — throughout the entirety of the lawsuit — for the cheerleaders to continue to display the banners. The school system immediately reversed the former superintendent’s initial decision in September of 2012 to limit religious messages on the banners and has allowed the banners ever since.

So any court decision on whether the banners are “government speech” or “private speech” is an academic exercise at this point. There is no dispute that the school system will affirmatively allow the religious banners to be displayed on the field. If this case were in federal court, it would have been dismissed long ago.

What is most baffling about the case is that both the cheerleaders and the Kountze Independent School District sought a ruling from the trial court in 2013 that harmed third parties who were not before the court. The school district and the cheerleaders conspired to have the court issue a ruling on the Establishment Clause rather than on the claims brought by the cheerleaders. The court ceded to those requests and issued an order that bizarrely said, “The evidence in this case confirms that religious messages expressed on run-through banners have not created, and will not create, an establishment of religion in the Kountze community.”

Huh? Both the district and the proselytizing cheerleaders agreed that there was no “evidence” of a constitutional violation against persons who were not before the court. Well, that settles it. In reality, the court never should have entertained such a self-serving motion in the first place.

If this all seems confusing and strange, that’s not surprising. Imagine what a court would do if a group of police officers sued their police department and sought an order that they had not violated the rights of others for unlawful search and seizure. Or imagine that a public-school teacher who taught creationism in the classroom sued the school district seeking an order that she did not violate the Establishment Clause.

Our court system is to be used for actual cases where the parties have adverse positions.

The Freedom From Religion Foundation has maintained all along that Christian displays on the athletic field that are part of an extracurricular activity violate the Establishment Clause. Regardless of what happens in this long-running case, there is nothing to cheer about here.

Patrick Elliot, the Foundation's Senior Litigation Counsel, hails from St. Paul, Minn. Patrick received a degree in legal studies and political science from the University of Wisconsin-Madison (2005). He attended the University of Wisconsin Law School and received his Juris Doctor in 2009. He joined FFRF as a staff attorney in 2010. Patrick oversees litigation for FFRF, including important First Amendment cases involving religion in schools, religious displays, and free speech violations. Patrick is admitted to practice in Wisconsin, Minnesota, the U.S. Supreme Court, and many federal district and circuit courts around the country. Patrick has served as the Chair of the Civil Rights & Liberties Section of the State Bar of Wisconsin (2020). He has helped plan and present educational programs for lawyers on civil rights issues.
All Articles by this author
PrevPreviousO say can you kneel? Free speech and football
NextWe aren’t afraid of controversyNext