Sadly I met Barbara Blaine for the first and only time a few months ago. She was an activist for survivors of priest abuse and a survivor herself. We got together after Barbara invited me to a meeting this summer, and rued the fact that we’d lost so many years we might have been collaborating on our shared goals. 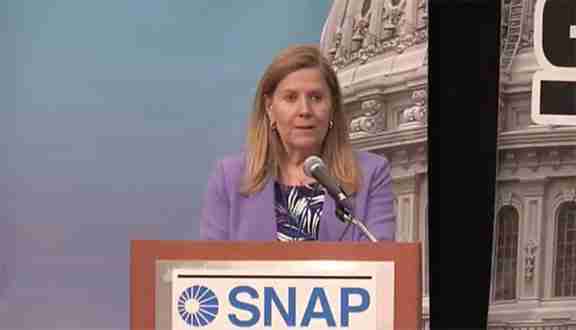 During a gathering that included survivors, activists and parents of survivors, many expressed the concern that they might die before they finally saw the Vatican held accountable. None of us could have imagined it would be Barbara who would die in less than two months.

A youthful, fit 61 year old who looked more like 45 and had recently completed a half-triathlon race in Chicago, Barbara died yesterday after suffering a massive heart attack a week ago. Apparently it was a random anomaly, a spontaneous tear in a blood vessel in her (very generous) heart.

Barbara felt like a “kindred nonspirit.” She had founded a pioneering national group, Survivors Network of those Abused by Priests, in 1989, and had recently retired, after building it up to more than 20,000 members.

She once told media she didn’t expect SNAP to be around for more than a year or so, imagining justice would be swift — that the Catholic Church would do the right thing. But the justice Barbara had every right to expect was not to be. The monstrous callousness and complicity of the Roman Catholic hierarchy propelled Barbara into lifelong activism.

As a junior school student, Barbara had been groomed and sexually preyed for years on by a priest at her Catholic school in Toledo, Ohio. Like many devout victims of predator priests, she had not told anyone at the time. Only in her late 20s did she begin to seek answers, then justice, more for others than for herself.

Barbara made things happen, growing a group, educating congregations and international committees, leading pickets, protests and media events against countless Catholic churches around the world to “out” predator priests and the higher-ups that coddle them. She cultivated media understanding of the crimes and cover-ups over many years. SNAP evolved from a self-help group under her leadership to an international presence, thanks to Barbara’s persevering drive.

Dan and I were able to interview Barbara recently for Freethought Radio. After the show, we spoke about Barbara’s plans to drive up next month to Freethought Hall, FFRF’s office in Madison, Wis., to be a guest on our upcoming new TV show. We planned to strategize with our attorneys about ways FFRF could help Barbara continue to seek Vatican accountability. Barbara had invited me to testify about separation of church and state at a meeting of survivors in Poland later this fall. Barbara had agreed to speak at FFRF’s convention next year. We at FFRF, including our Board, were extremely eager to collaborate with her on ensuring that churches, priests and popes are not above the law.

Barbara told me she had vowed to herself never to marry, never wanting, after her experience with the priest, for a man to have authority over her as she expected would happen in a marriage. In later years, she did meet the right man and told me how happy she was, greatly enjoying being a step-grandmother. My condolences to her bereaving family.

The rest of us must step up our resistance against the cover-up of Catholic crimes and demand accountability in Barbara Blaine’s memory.

Annie Laurie Gaylor is co-president of the Freedom From Religion Foundation. She co-founded FFRF in 1976 as a college student with her mother Anne Nicol Gaylor. She served as the editor of FFRF’s newspaper, Freethought Today, from 1985-2009. She became FFRF co-president with Dan Barker in 2004. Annie Laurie has authored three books for FFRF: Woe to Women: The Bible Tells Me So; Woe to Women: The Bible Tells Me So; and Women Without Superstition: “No Gods – No Masters”, the first anthology of women freethinkers.
All Articles by this author
PrevPreviousChurches hit by Harvey and Irma shouldn’t get federal money
NextChurches suing FEMA for recovery funds should loseNext